In previous posts I had written that Innovations the Online Dating Industry needs will come from latest discoveries in theories of romantic relationships development with commitment (personality similarity between prospective mates).

WorldWide, there are over 5,000 online dating sites
but no one is using the 16PF5 to assess personality of its members.
Without acquiring the license to offer the 16PF5 for serious dating, it will be impossible to innovate and revolutionize the Online Dating Industry.

In compatibility matching methods there are 2 steps:
1) to objectively measure personality traits or other human variables.
2) to calculate compatibility between prospective mates.

The 16PF5 test is not more complex than the one used by eHarmony , Match/Chemistry, PerfectMatch, Be2, Parship and others. 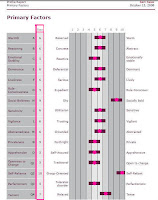 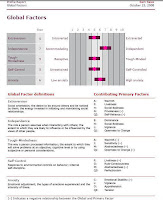 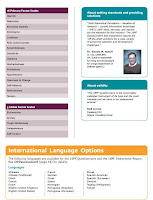 Time: computer administration, less than 30 minutes. [perhaps faster than eHarmony's and Chemistry's]
Reliability: Internal consistency averages .76. Test/retest reliabilities average .80 for two-week interval, and .70 for two-month interval. [far better than any others, which are less than .60]
Validity: Validity studies presented in the 16PF Fifth Edition Technical Manual provide considerable evidence of the construct validity of the primary and global scales.

I think women will love a rational explanation of why they need to take the test 3 times, with these 2 fresh papers

2) "Does the contraceptive pill alter mate choice in humans?" Alvergne & Lummaa (2009)
If you carefully read that milestone paper you will discover that although men do not take contraceptive pills, they detect women who do not take and women who take those pills or other hormonal contraceptive methods. "revisiting the lap-dancing study, normally cycling lap dancers made nearly USD20 more per hour in their fertile phase as compared to their luteal phase, whereas pill users did not show any mid-cycle peak in tip earnings" 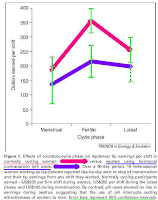 "Effects of ovulatory-cycle phase on lapdancer tip earnings per shift in normally cycling women versus women using hormonal contraception (pill users). Over a 60-day period, 18 heterosexual women working as lap-dancers reported day-by-day start or stop of menstruation and their tip earnings from any shift they worked. Normally cycling participants earned nearly USD335 per 5-hr shift during oestrus, USD260 per shift during the luteal phase, and USD185 during menstruation. By contrast, pill users showed no rise in earnings during oestrus, suggesting that the use of pill interrupts cycling attractiveness of women to men. Error bars represent 95% confidence intervals." Figure 1 in paper

I think lots of persons could be interested in meeting/contacting other persons sharing nearly the same personality because they will be *predictable* for them.
-----------------------------
a note about IRT and the 16PF5:
IRT models have been applied to the 16PF and several papers and conference presentations have described those efforts.
Bedwell. (2007). Matching method to inquiry: Measurement equivalence and the 16PF questionnaire. In Bedwell and Moyle (Chairs). Santa Clause, the Tooth Fairy and Perfect Measurement Equivalence. Symposium at the annual meeting of the Society of Industrial and Organizational Psychology, April, New York, NY.

Irwing & Bedwell. (2006). Tests of factorial invariance and DIF for the American and Japanese versions of the 16PF in two large standardization samples. Paper presented at the International Test Commission 5th International Conference on Psychological and Educational Test Adaptation across Languages and Cultures, July, Brussels, Belgium.

Ellis & Mead. (2000). Assessment of the measurement equivalence of a Spanish translation of the 16PF Questionnaire. Educational and Psychological Measurement, 60, 787-807.
Publicado por FERNANDO_ARDENGHI en 1:51 AM