ppt presentation of the above paper 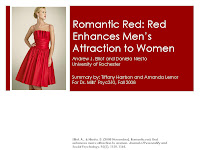 as the sweaty T shirt experiment where women found the perspiration scent of some men very attractive, but it was not tested if they really were attracted by the real men.

1- What is important in attracting people to one another may not be important in making couples happy.
Latest Research in Theories of Romantic Relationships Development outlines: compatibility is all about a high level on personality* similarity* between prospective mates for long term mating with commitment.
*personality measured with a normative test.
*similarity: there are differents ways to calculate similarity, it depends on how mathematically is defined.