I had read the thesis "Scripts For Online Dating: A Model and Theory of Online Romantic Relationship Initiation" and it is more suitable for an overall "C" than for an "A", because: 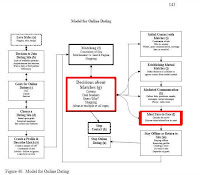 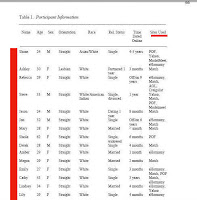 1) The author says "My focus is on the process of initiating romantic relationships using dating sites starting with the decision to join a site and ending with the first offline meeting."
but she does not cite the milestone & latest papers in Theories of Romantic Relationships Development like:

Barelds & Dijkstra (2008)
"Do People Know What They Want: A Similar or Complementary Partner?"

2) It mainly analyzes 15 participants from Match, eHarmony and PlentyofFish up to December 2009.

4) The author could not see that actual Online Dating Sites has low success rates for serious daters. The majority of daters will fail in finding someone highly compatible.

5) The author could not rediscover a range convergence phenomenon between the 3 mains tools online dating sites can offer: searching by your own, Bidirectional Recommendation Engines and Compatibility Matching Methods. Any member receives on average 3 to 4 prospective mates as selected / recommended / compatible for dating purposes per 1,000 (one thousand) members screened in the database.
They all 3 are performing the same for serious daters, with a high percentage of false positives, like out of control gun machines shooting flowers.

That range convergence phenomenon is what I had called "the online dating sound barrier", in 2003, when I had discovered than problem, 7 long years ago.

That thesis is flawed.

Without the internal collaboration of the big online dating sites (like eHarmonyLabs) it will be nearly impossible for any Academic to conduct serious research, but the big sites offering compatibility matching methods are only fueled by big marketing budgets and not by serious scientific evidence.
Publicado por FERNANDO_ARDENGHI en 11:42 PM