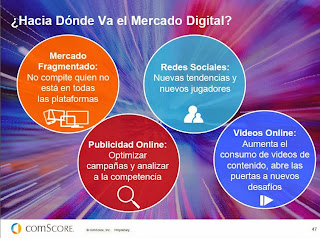 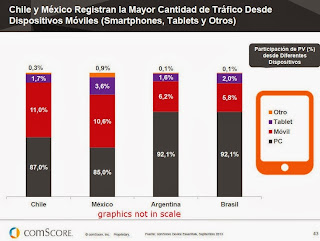 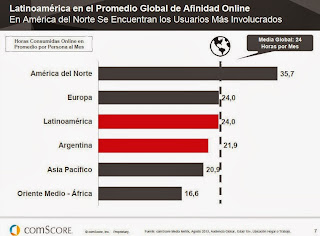 Key insights from the 2013 Argentina Digital Future in Focus report include:

- The Argentinian online population tends to be older than the regional average, with nearly 25 percent of internet users age 45 and older. Users age 55 and older spend the most time online, with nearly 24 hours on average per user in August 2013.
- Argentina is the third most highly engaged social networking market worldwide, with users spending an average of 9 hours in the category in August 2013.
- Mobile phones and tablets continue to account for a growing amount of digital traffic. Argentina now sees 7.9 percent of all web-based page views consumed beyond the personal computer, predominantly on smartphones and tablets.
- Internet users in Argentina are the most likely in Latin America to view online video content, with more than 95 percent of Argentina's internet population doing so in August 2013.

U.S.A. is no longer center of the digital world.  China now has world’s largest desktop user base.
Mobile & Multi-Platform: With the availability of smartphones and tablets, the multi-platform omnivore has emerged. But, it’s not a zero-sum game: More devices result in more time on all devices, including TV.
Full Webinar and some slides LATAM Digital Future 2013
2013 Latin America Digital Future in Focus Report by comScore

EXCELLENT research! Mobile's Impact on Dating and Relationships.
What means mobile for the majority of the persons? SmartPhones? Tablets? All-in-one computers with wi-fi you can take from dining room to the bedroom?
In the near future everything will be mobile?