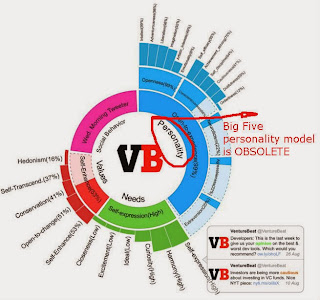 Just read that post at Online Dating Insider and guess ...
Nothing new.

Moreover the HEXACO normative test is replacing the obsolete Big Five Model of personality.
“While the Big Five has been the dominant approach in personality research for over two decades, recent investigations have identified a sixth independent personality dimension referred to as Honesty-Humility (Ashton & Lee, 2007, 2009). ”

The only way to revolutionize the Online Dating Industry is using the 16PF5 normative personality test, available in different languages to assess personality of members, or a proprietary test with exactly the same traits of the 16PF5 and expressing compatibility with eight decimals (needs a quantized pattern comparison method, part of pattern recognition by cross-correlation, to calculate similarity between prospective mates.)
All other proposals are NOISE and perform as placebo.
e.g. eHarmony's algorithm is in the range of showing you 3 most compatible persons per 1,000 persons screened, and with the 16PF5 you can reach 3 most compatible persons per 100,000 persons screened; a 100 times more powerful algorithm (NOT 100% improvement, a 100 X improvement, really an innovation)