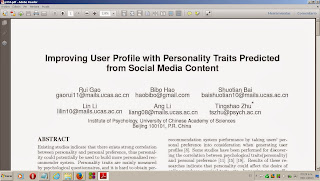 
The above paper is from RecSys '13 Proceedings of the 7th ACM conference on Recommender systems.

Some key points and my thoughts:

The HEXACO normative test will replace the obsolete Big Five Model of personality.

"individuals with similar personality traits prefer to similar types of music " seems to be wrong.
"Value similarity is the missing link in explaining the musical bonding phenomenon [and not personality similarity], which seems to hold for Western and non-Western samples and in experimental and natural settings. " extracted from paper "How Shared Preferences in Music Create Bonds Between People: Values as the Missing Link" 2011


The only way to revolutionize the Online Dating Industry is using the 16PF5 normative personality test, available in different languages to assess personality of members, or a proprietary test with exactly the same traits of the 16PF5 and expressing compatibility with eight decimals (needs a quantized pattern comparison method, part of pattern recognition by cross-correlation, to calculate similarity between prospective mates.)