Only the congruent survive / Personality similarities 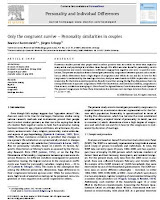 "Results of another branch of research in the field of romantic relationships suggest that congruence between spouses leads to marriage satisfaction and marriage satisfaction in turn predicts a long_lasting partnership. Especially against the background of the increasing divorce rate in Germany, reaching over 50% during the last years, personality congruence betweenspouses might help to explain divorces. If this assumption holds, then long_lasting marriages are those in which the spouses are satisfied with their partnership to such a degree that they doprefer not to end it. If congruence is a good predictor of satisfaction then longer lasting marriages should be those with a higher level of congruence compared to shorter ones or – the other way round - congruent partnerships should be longer lasting on average than less congruent ones. This assumption was clearly supported by the present findings. The longer a marriage lasts the more congruent are the couples. This effect, however, was found to be true only for Agreeableness, Conscientiousness, and Openness but not for Extraversion and Emotional Stability."

Latest Research in Theories of Romantic Relationships Development outlines: compatibility is all about a high level on personality* similarity** between prospective mates for long term mating with commitment.
*Although no actual fresh paper uses the 16PF normative personality test (they mostly use different versions of the normative Big5 personality test instead) and linear or logistic multivariate regression equations to calculate similarity, they clearly show a connection between personality similarity and marital happiness / dyadic success (stability and satisfaction) for some persons.
**Similarity is a word that has different meanings for different persons or companies, it exactly depends on how mathematically is defined.