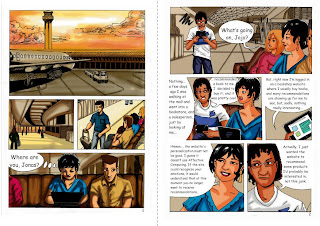 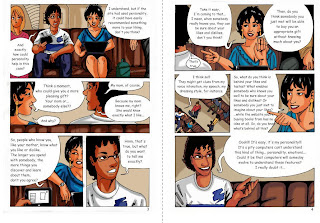 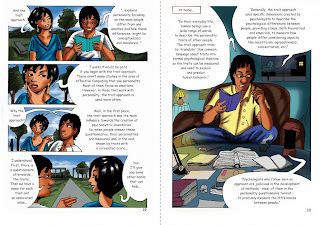 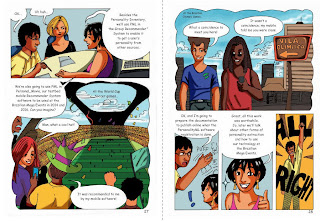 PersonalityML developed by the Artificial Intelligence and Affective Computing from the Brazilian Universidade Federal de Sergipe, is the WRONG approach to innovate in the Personality Based Recommender Systems Arena. It is not necessary to develop/create a new markup language to include personality traits of users/daters.
Moreover all indirect methods to assess personality traits add distortion [eg: how to extract user personality by using a keyboard (typing pattern)] and the Big5 Model is an oversimplification, good enough to orientative purposes but not good enough for predictive purposes. Remember the Ten-Item Personality Inventory (TIPI) is a ten-item measure of the Big Five personality dimensions – 2 items for each of the 5 dimensions. Each item is rated on a 7-point scale that ranges from 1 (disagree strongly) to 7 (agree strongly). The measure was created to be finished within a minute or so, though it sacrifices some of the reliability and validity found in longer measures of the Big Five personality dimensions. 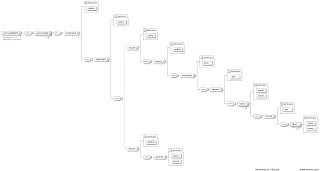 Personality Based Recommender Systems are the next generation of recommender systems because they perform FAR better than Behavioural ones (past actions and pattern of personal preferences)
That is the only way to improve recommender systems, to include the personality traits of their users. 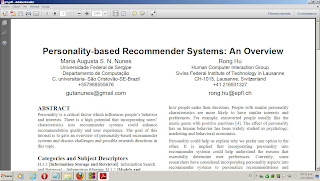 
In compatibility matching methods there are 2 steps:1) to objectively measure personality traits or other human variables (with the 16PF5 test) without distortion.2) to calculate compatibility between prospective mates

IPSATIVE personality tests are OBSOLETE (self-descriptive questionnaires) and should be discarded: MBTI (PerfectMatch), DISC (ThomasKnowsPeople), Enneagram (Dopasowani) or other proprietary ipsative tests like the ones used at Chemistry, ButterfliesAgain, Doskonalapara, PembePanjur, LittleHint, oneGoodLove and others.NORMATIVE personality tests like Big5 versions used at PlentyOfFish, eHarmony, Meetic Affinity, Parship, Be2, True are good for orientative purposes but not good enough for predictive purposes. "Because the Big Five groups the more specific primary-level factors, feedback organized around the five Global Factor scales is more easily understood. For detailed feedback or predictive purposes, one should assess the more specific primary factors. Research has shown that more specific factors like the primary scales of the 16PF Questionnaire predict actual behavior better than the Big 5 Global Factors. For example, one extravert (a bold, fearless, high-energy type) may differ considerably from another (a sweet, warm, sensitive type), depending on the extraversion-related primary scale score patterns, so deeper analysis is typically warranted." Extracted from the 16PF5 Manual


WorldWide, there are over 5,000 -five thousand- online dating sites
but no one is using the 16PF5 (or similar) to assess personality of its members!
but no one calculates similarity with a quantized pattern comparison method!
but no one can show Compatibility Distribution Curves to each and every of its members!
but no one is scientifically proven! The only way to revolutionize the Online Dating Industry is using the 16PF5 normative personality test, available in different languages to assess personality of members, or a proprietary test with exactly the same traits of the 16PF5 and expressing compatibility with eight decimals (needs a quantized pattern comparison method, part of pattern recognition by cross-correlation, to calculate similarity between prospective mates.)
High precision in matching algorithms is precisely the key to open the door and leave the infancy of compatibility testing.
It is all about achieving the eighth decimal!
With 8 decimals, you have more precision than any person could achieve by searching on one's own, but the only way to achieve the eighth decimal is using analysis and correlation with quantized patterns.
Without offering the NORMATIVE16PF5 (or similar test measuring exactly the 16 personality factors) for serious dating, it will be impossible to innovate and revolutionize the Online Dating Industry All other proposals are NOISE and perform as placebo.

What comes after Social Networking?
My bet: The Next Big Investment Opportunity on the Internet will be …. Personalization!
Personality Based Recommender Systems and Strict Personality Based Compatibility Matching Engines for serious Online Dating with the normative 16PF5 personality test. The market remains enormous!!
Publicado por FERNANDO_ARDENGHI en 8:28 PM