Recently the IAC, had acquired a new rotten fish, Speeddate. They can not innovate any more and acquire online dating companies in order to lower high acquisition costs from paid online dating sites (they can not abandon the attracting, converting and retaining marketing stages; the automatic renewal of their members's subscriptions with dirty credit-card billing trickery).

Revenue of PlentyOfFish Media's sites (PlentyOfFish, eVow and several dating sites powered by a white label dating company) is in the range of USD40 million.

USD40million / USD1,000 Million == 4% of market (in revenue).
PlentyOfFish has the traffic but others receive the money.

The IAC instead of acquired Speeddate, they should had put USD10 million and develop a new compatibility matching site to replace Chemistry. 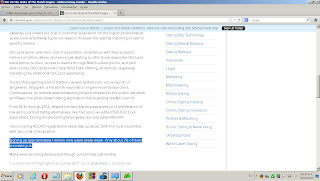 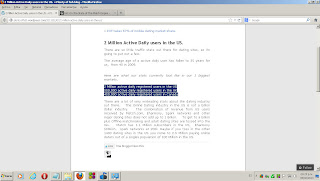 NO INNOVATIONS SINCE YEARS IN THE ONLINE DATING INDUSTRY.
C level executives are cooking barbecues under the water (selling smoke) and not paying attention to latest research from Academics which could be beneficial for the Online Dating Industry. Wasting precious time with Matchmakers which should be obsolete.
Actual matching algorithms used by eHarmony, Chemistry, PlentyOfFish and others, even behavioural recommender systems, can not be improved, they need to be discarded NOW. Because they are in the range of 3 to 4 prospective mates as selected / recommended / compatible for dating purposes per 1,000 members screened in the database. They all 3 are performing the same for serious daters, with a high percentage of false positives, like gun machines firing flowers.
They can not break the online dating sound barrier!
You do not need to improve a piston engine when you need a jet engine to break sound barrier.

That range convergence phenomenon is what I had called "the online dating sound barrier", in 2003, when I had discovered than problem, 10 long years ago.


Without offering the NORMATIVE16PF5 (or similar test measuring exactly the 16 personality factors) for serious dating, it will be impossible to innovate and revolutionize the Online Dating Industry
All other proposals are NOISE and perform as placebo.
Publicado por FERNANDO_ARDENGHI en 10:25 PM