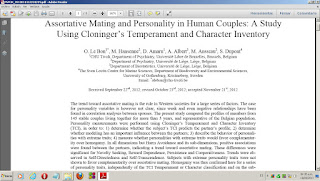 The trend toward assortative mating is the rule in Western societies for a large series of factors. The case for personality variables is however not clear, since weak and even negative relationships have been found in correlation analyses between spouses. The present study compared the profiles of members from 145 stable couples living together for more than 5 years, and representative of the Belgian population. Personality measurements were performed using Cloninger's Temperament and Character Inventory (TCI), in order to: 1) determine whether the subject's TCI predicts the partner's profile; 2) determine whether modeling has an important influence between the partners; 3) describe the behavior of personalities with extreme traits; 4) measure whether personalities with extreme traits would favor complementarity over homogamy. In all dimensions but Harm Avoidance and its sub-dimensions, positive associations were found between the partners, indicating a trend toward assortative mating. These differences were significant for Novelty Seeking, Reward Dependence, Persistence and Cooperativeness. Trends were observed in Self-Directedness and Self-Transcendence. Subjects with extreme personality traits were not shown to favor complementarity over assortative mating. Homogamy was thus confirmed here for a series of personality traits, independently of the TCI Temperament or Character classification and on the subjects position in the distribution.

The present study's results, as well as the results found in previous studies (e.g., Eastwick & Finkel, 2008), may be used to educate people, especially singles, about what really matters in long-term relationships, for instance, similarity in personality, instead of complementarity."

Latest Research in Theories of Romantic Relationships Development shows: compatibility is all about a high level on personality* similarity** between prospective mates for long term mating with commitment.
*Although no actual fresh paper uses the 16PF normative personality test (they mostly use different versions of the normative Big5 personality test instead) and linear or logistic multivariate regression equations to calculate similarity, they clearly show a connection between personality similarity and marital happiness / dyadic success (stability and satisfaction) for some persons.
**Similarity is a word that has different meanings for different persons or companies, it exactly depends on how mathematically is defined.

What comes after Social Networking?
My bet: The Next Big Investment Opportunity on the Internet will be …. Personalization!
Personality Based Recommender Systems and Strict Personality Based Compatibility Matching Engines for serious Online Dating with the normative 16PF5 personality test.