How to calculate personality similarity between users

How to calculate personality similarity between users?
Short answer: the key is the ENSEMBLE!
(the whole set of different valid possibilities)

Similarity is a word that has different meanings for different persons or companies, it exactly depends on how mathematically is defined. I calculate similarity in personality patterns with (a proprietary) pattern recognition by correlation method. It takes into account the score and the trend to score of any pattern. 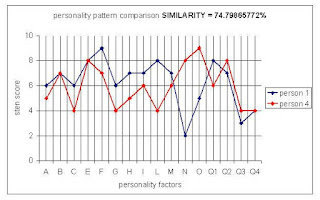 Using the 16PF5 normative personality test, available in different languages to assess personality of members, or a proprietary test with exactly the same traits of the 16PF5 then the ensemble of the 16PF5 is: 10E16, big number as All World Population is in the range of 7.0 * 10E9 (estimated MARCH 2013)

Suppose you are citizen of country "A" where speed limit is 70mph and the population drives at
65 mph average with 2mph standard deviation (some persons always surpass the speed limit) in a normal distribution,
and you are tested driving at 67 mph so you are OVER the average in 1 standard deviation, you are at 84.1344% over the whole population.
You will score 8 or 9 in a sten scale depending on how it was constructed. You will be seen as VERY HIGH in that scale.

If you drive in country "B" where speed limit is 75mph and the population drives at
71 mph average with 2mph standard deviation (some persons always surpass the speed limit) in a normal distribution,
and you are tested  again driving at 67 mph,  you are UNDER the average in 2 standard deviation, you are at 02.2751% under the whole population.
You will score 1 in a sten scale. You will be seen as VERY LOW in that scale.

eHarmony, True, PerfectMatch, MeeticAffinity, Parship, Be2, PlentyOfFish, Chemistry and others like them are in the range of 3 to 4 persons compatible per 1,000 persons screened. Any member of those sites receives on average 3 to 4 prospective mates as compatible for dating purposes per 1,000 (one thousand) members screened in the database. So in a 10,000,000 women database, any man will see 30,000 to 40,000 women as highly compatible; 30,000 women is the population of an average small city. Any person can achieve 3 to 4 persons as highly compatible per 1,000 persons screened, searching by his/her own or by mutual filtering methods!
eHarmony , True, PerfectMatch, MeeticAffinity, Parship, Be2, PlentyOfFish, Chemistry and others have a low effectiveness/efficiency level of their matching algorithms.
The Online Dating Industry does not need a 10% improvement, a 50% improvement or a 100% improvement. It does need "a 100 times better improvement"
LIFEPROJECT METHOD is like the Teller Ulam design for recommender systems and the Online Dating Industry.

The 3 milestone discoveries of the 2001 - 2010 decade for Theories of Romantic Relationships Development are:
I) Several studies showing contraceptive pills users make different mate choices, on average, compared to non-users. "Only short-term but not long-term partner preferences tend to vary with the menstrual cycle"
II) People often report partner preferences that are not compatible with their choices in real life. (Behavioural recommender systems or other system that learns your preferences are useless)
III) What is important in attracting people to one another may not be important in making couples happy. Compatibility is all about a high level on personality similarity between prospective mates for long term mating with commitment. Also there is a similarity trilogy between genetic, mate choice and personality based recommender systems. Personality Based Recommender Systems are the next generation of recommender systems because they perform far better than Behavioural ones (past actions and pattern of personal preferences)
That is the only way to improve recommender systems, to include the personality traits of their users. They need to calculate personality similarity between users but  there are different formulas to calculate similarity.
In case you did not notice, recommender systems are morphing to .......... compatibility matching engines, as the same used in the Online Dating Industry since years, with low success rates!!! because they mostly use the Big5 to assess personality and the Pearson correlation coefficient to calculate similarity.
Please remember: Personality traits are highly stable in persons over 25 years old to 45 years old.

In compatibility matching methods there are 2 steps:1) to objectively measure personality traits or other human variables (with the 16PF5 test) without distortion.2) to calculate compatibility between prospective mates

IPSATIVE personality tests are OBSOLETE (self-descriptive questionnaires) and should be discarded: MBTI (PerfectMatch), DISC (ThomasKnowsPeople), Enneagram (Dopasowani) or other proprietary ipsative tests like the ones used at Chemistry, ButterfliesAgain, Doskonalapara, PembePanjur, LittleHint, oneGoodLove and others.NORMATIVE personality tests like Big5 versions used at PlentyOfFish, eHarmony , Meetic Affinity, Parship, Be2, True are good for guidance (orientation) purposes but not good enough for predictive purposes. "Because the Big Five groups the more specific primary-level factors, feedback organized around the five Global Factor scales is more easily understood. For detailed feedback or predictive purposes, one should assess the more specific primary factors. Research has shown that more specific factors like the primary scales of the 16PF Questionnaire predict actual behavior better than the Big 5 Global Factors. For example, one extravert (a bold, fearless, high-energy type) may differ considerably from another (a sweet, warm, sensitive type), depending on the extraversion-related primary scale score patterns, so deeper analysis is typically warranted." Extracted from the 16PF5 Manual


WorldWide, there are over 5,000 -five thousand- online dating sites
but no one is using the 16PF5 (or similar) to assess personality of its members!
but no one calculates similarity with a quantized pattern comparison method!
but no one can show Compatibility Distribution Curves to each and every of its members!
but no one is scientifically proven! The only way to revolutionize the Online Dating Industry is using the 16PF5 normative personality test, available in different languages to assess personality of members, or a proprietary test with exactly the same traits of the 16PF5 and expressing compatibility with eight decimals (needs a quantized pattern comparison method, part of pattern recognition by cross-correlation, to calculate similarity between prospective mates.)
High precision in matching algorithms is precisely the key to open the door and leave the infancy of compatibility testing.
It is all about achieving the eighth decimal!
With 8 decimals, you have more precision than any person could achieve by searching on one's own, but the only way to achieve the eighth decimal is using analysis and correlation with quantized patterns.
Without offering the NORMATIVE16PF5 (or similar test measuring exactly the 16 personality factors) for serious dating, it will be impossible to innovate and revolutionize the Online Dating Industry All other proposals are NOISE and perform as placebo.

Email ThisBlogThis!Share to TwitterShare to FacebookShare to Pinterest
Etiquetas: innovations