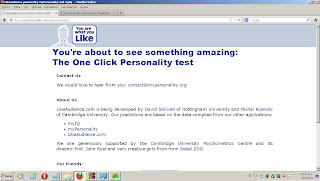 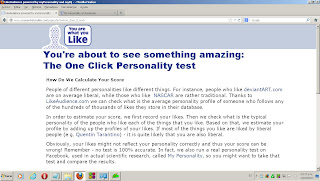 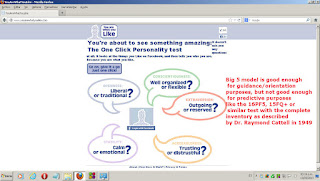 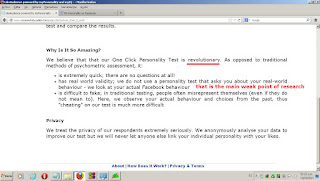 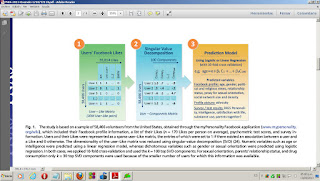 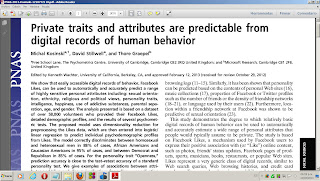 PAPER "Private traits and attributes are predictable from digital records of human behavior"
"The study is based on a sample of 58,466 volunteers from the United States, obtained through the myPersonality Facebook application, which included their Facebook profile information, a list of their Likes (n = 170 Likes per person on average), psychometric test scores, and survey information."

"People of different personalities like different things. .... Thanks to PreferenceTool (f.k.a.LikeAudience) we can check what is the average personality profile of someone who follows any of the hundreds of thousands of likes they store in their database.
In order to estimate your score, we first record your likes. Then we check what is the typical personality of the people who like each of the things that you like. Based on that, we estimate your profile by adding up the profiles of your likes. If most of the things you like are liked by liberal people, it is quite likely that you are also liberal. "

"We believe that that our One Click Personality Test is revolutionary. As opposed to traditional methods of psychometric assessment, it:

*   is extremely quick; there are no questions at all!
*  has real world validity; we do not use a personality test that asks you about your real-world behaviour - we look at your actual Facebook behaviour" and I add: that is the WEAK point of the whole research! Please remember Big5 versions  are good for guidance (for orientation) purposes but not good enough for predictive purposes. Since the traits which compose the Big Five model are relatively broad, they are not nearly as predictive and accurate for explaining human behavior as some of the more abundant, specific traits.

WorldWide, there are over 5,000 (five thousand) online dating sites they can be classified as:
1.0: "Browsing/Searching Options, Powerful Searching Engines"  "You can fastly search for the person you want, but most probably that person does not exist or does not want to meet you because you are not compatible with him/her."
1.5: "Unidirectional Recommendation Engines"
2.0: "Matching based on Self-Reported Data / Bidirectional Recommendation Engines"
3.0: "Compatibility Matching Algorithms"
Compatibility is all about a high level on personality* similarity* between prospective mates for long term mating with commitment.
*personality measured with a normative test.
*similarity: there are different ways to calculate similarity, it depends on how mathematically is defined.
STRICT PERSONALITY SIMILARITY and not "meet other people with similar interests"
The 3 milestone discoveries of the 2001 - 2010 decade for Theories of Romantic Relationships Development are: I) Several studies showing contraceptive pills users make different mate choices, on average, compared to non-users. "Only short-term but not long-term partner preferences tend to vary with the menstrual cycle" II) People often report partner preferences that are not compatible with their choices in real life. (Behavioural recommender systems or other system that learns your preferences are useless) III) What is important in attracting people to one another may not be important in making couples happy. Compatibility is all about a high level on personality similarity between prospective mates for long term mating with commitment. Also there is a similarity trilogy between genetic, mate choice and personality based recommender systems.
Personality Based Recommender Systems are the next generation of recommender systems because they perform FAR better than Behavioural ones (past actions and pattern of personal preferences)
That is the only way to improve recommender systems, to include the personality traits of their users. They need to calculate personality similarity between users but  there are different formulas to calculate similarity.
In case you did not notice, recommender systems are morphing to .......... compatibility matching engines, as the same used in the Online Dating Industry since years, with low success rates!!! because they mostly use the Big5 to assess personality and the Pearson correlation coefficient to calculate similarity.
Please remember: Personality traits are highly stable in persons over 25 years old to 45 years old.

In compatibility matching methods there are 2 steps:1) to objectively measure personality traits or other human variables (with the 16PF5 test) without distortion.2) to calculate compatibility between prospective mates

IPSATIVE personality tests are OBSOLETE (self-descriptive questionnaires) and should be discarded: MBTI (PerfectMatch), DISC (ThomasKnowsPeople), Enneagram (Dopasowani) or other proprietary ipsative tests like the ones used at Chemistry, ButterfliesAgain, Doskonalapara, PembePanjur, LittleHint, oneGoodLove and others.NORMATIVE personality tests like Big5 versions used at PlentyOfFish, eHarmony , Meetic Affinity, Parship, Be2, True are good for guidance (orientation) purposes but not good enough for predictive purposes. "Because the Big Five groups the more specific primary-level factors, feedback organized around the five Global Factor scales is more easily understood. For detailed feedback or predictive purposes, one should assess the more specific primary factors. Research has shown that more specific factors like the primary scales of the 16PF Questionnaire predict actual behavior better than the Big 5 Global Factors. For example, one extravert (a bold, fearless, high-energy type) may differ considerably from another (a sweet, warm, sensitive type), depending on the extraversion-related primary scale score patterns, so deeper analysis is typically warranted." Extracted from the 16PF5 Manual
Normative tests can not simply be translated, because you need the norm for that test, and that norm is actualized each and every time Census Figures are released
The 16PF5 test is available in
- English for the United States and the Norm for the United States (sample of individuals with the same demographic characteristics of the United States).
- English for Canada and the Norm for Canada (sample of individuals with the same demographic characteristics of Canada)
- English for the United Kingdom and the Norm for the United Kingdom (sample of individuals with the same demographic characteristics of the United Kingdom).
- English for Australia and the Norm for Australia (sample of individuals with the same demographic characteristics of Australia).
- French for France and the Norm for France.
- German for Germany and the Norm for Germany.
- Spanish for Spain and the Norm for Spain.
- Italian for Italy and the Norm for Italy.
and many more "With over 60 years of research and application behind it, the 16PF5 has become internationally well known and respected, with over 20 different translated versions."
The output of the 16PF5 test are 16 variables STens (Standard Tens) taking integer values from 1 to 10. STens divide the score scale into ten units.
STens have the advantage that they enable results to be thought of in terms of bands of scores, rather than absolute raw scores. These bands are narrow enough to distinguish statistically significant differences between candidates, but wide enough not to over emphasize minor differences between candidates.

What comes after Social Networking?
My bet: The Next Big Investment Opportunity on the Internet will be …. Personalization!
Personality Based Recommender Systems and Strict Personality Based Compatibility Matching Engines for serious Online Dating with the normative 16PF5 personality test.