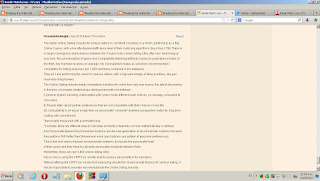 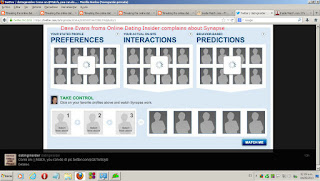 "Codenamed "Synapse", the Match algorithm uses a variety of factors to suggest possible mates. While taking into account a user's stated ­preferences, such as desired age range, hair colour and body type, it also learns from their actions on the site. So, if a woman says she doesn't want to date anyone older than 26, but often looks at ­profiles of thirty-somethings, Match will know she is in fact open to meeting older men. Synapse also uses "triangulation". That is, the algorithm looks at the behaviour of similar users and factors in that ­information, too."


PlentyOfFish's algorithm also performs as a behavioral recommendation engine based on past actions and it is full rubbish.

It is really funny how those "important persons / math geniuses" from big Online Dating Sites can waste precious time with Behavioural Recommender Systems, improving them, "refining" those Behavioural Matching Algorithms, which are all rubbish.

No innovations since years for the Online Dating Industry.
The entire Online Dating Industry for serious daters in 1st World Countries is a HOAX, performing as a Big Online Casino, with a low effectiveness/efficiency level of their matching algorithms (less than 10%), in the same range as searching by your own.
Innovations are not adding more bells and whistles to actual online dating sites.
The Online Dating Industry is waiting for the innovative compatibility matching method which can kill the Matchmaking Industry and other Offline Dating Proposals. The innovations the Online Dating Industry needs, will definitively come from the new discoveries on Theories of Romantic Relationships Development.
I) Several studies showing contraceptive pills users make different mate choices, on average, compared to non-users. "Only short-term but not long-term partner preferences tend to vary with the menstrual cycle"
II) People often report partner preferences that are not compatible with their choices in real life. (Behavioural recommender systems or other system that learns your preferences are useless)
III) What is important in attracting people to one another may not be important in making couples happy. Compatibility is all about a high level on personality similarity between prospective mates for long term mating with commitment.