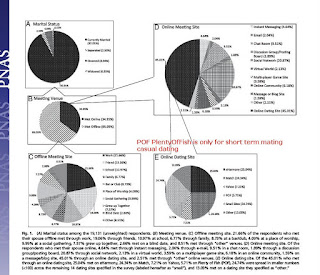 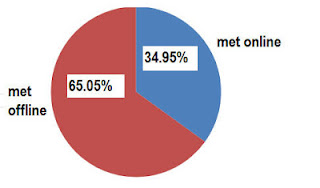 Imagine a report saying the gamblers who had won a big amount of money in any of the Casinos of Las Vegas, are happier than ever.
That is nothing new, because gamblers who win are a minority.
The majority of gamblers are not going to win nothing.
That report will not be representative of the universe of gamblers.

The same is quite similar to the report Larry Magid had posted at Forbes: "A Third of Recently Married Couples Met Online and They're More Satisfied and Less Likely To Split-Up"
A study published in the Proceedings of the National Academy of Sciences found that 35% of couples married between 2005 and 2012 met online and that these couples were slightly more likely to stay together and "associated with slightly higher marital satisfaction among those respondents who remained married," according to the report.
Yes, of course, they had met online thanks to eHarmony online dating site, but those married persons are not representative of the universe of eHarmony's member. They are a minority.

Of that minority, the majority of the couples formed thanks to eHarmony, are not going to marry, they are going to be in a non-married monogamous relationship.

eHarmony's "closely-guarded matching algorithm" is performing as placebo, as a machine gun shooting flowers; with a low effectiveness/efficiency level of its matching algorithm (less than 10%), in the same range as searching by your own.