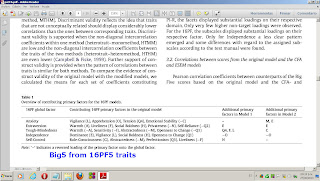 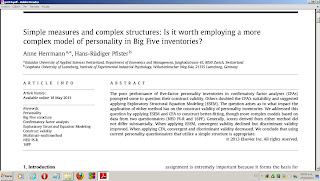 Simple measures and complex structures: Is it worth employing a more complex model of personality in Big Five inventories?

Abstract
The poor performance of five-factor personality inventories in confirmatory factor analyses (CFAs) prompted some to question their construct validity. Others doubted the CFA's suitability and suggested applying Exploratory Structural Equation Modeling (ESEM). The question arises as to what impact the application of either method has on the construct validity of  personality inventories. We addressed this question by applying ESEM and CFA to construct better-fitting, though more complex models based on data from two questionnaires (NEO PI-R and 16PF). Generally, scores derived from either method did not differ substantially. When applying ESEM, convergent validity declined but discriminant validity improved. When applying CFA, convergent and discriminant validity decreased. We conclude that using current personality questionnaires that utilize a simple structure is appropriate.

The 16PF and the NEO-PI-R differ in that the first-order level of personality is described with 15 and 30 scales, respectively. An alignment exists, however, between the second-order level, where there is a NEO domain counterpart for each 16PF global factor. The counterparts for both instruments are 16PF-Extraversion and NEO-Extraversion, 16PF-Anxiety and NEO-Neuroticism, 16PFSelf-Control and NEO-Conscientiousness, 16PF-Independence and NEO-Agreeableness and, finally, 16PF-Tough-Mindedness and NEO-Openness. The last two pairs are defined in the opposite direction.

2.2. Sample
The sample used in this study included 620 respondents and was a subset of the Eugene Springfield Community Sample. The original ESCS sample was slightly larger (N = 857 for the NEO PI-R and N = 680 for the 16PF). In our study, only the 620 participants who completed both instruments were included in the sample. Of these, 97% were Caucasian, 57% were female, and roughly half the sample had achieved at least a college degree. The age of the respondents ranged from 18 to 85 years old (M = 52, SD = 13).
Because both questionnaires were completed by the same sample, unknown characteristics of different samples can be ruled out as an explanation for any observed differences between instruments. This set-up also allows us to examine the construct validity across both instruments.

Personality questionnaires have repeatedly exhibited good criterion-related validity. The poor support of their internal structure has raised the question of how these measures can predict external criteria. However, the simple structure may in fact be beneficial for the measures' predictive capabilities. Several studies have demonstrated that broader domains reduce the predictive power of personality. In addition, from a conceptual and practical viewpoint, using these more complex structures seems to be less useful because it is harder to interpret relationships between broader domains and external criteria. This study provides reasoning for the continued use of current personality instruments that have demonstrated criterion-related validity despite CFA findings that suggest a more complex structure.

(The study did not examine the impact the structures proposed by CFA and ESEM have on criterion-related validity.)

Please remember:
IPSATIVE personality tests are OBSOLETE (self-descriptive questionnaires) and should be discarded: MBTI (PerfectMatch), DISC (ThomasKnowsPeople), Enneagram (Dopasowani) or other proprietary ipsative tests like the ones used at Chemistry, ButterfliesAgain, Doskonalapara, PembePanjur, LittleHint, oneGoodLove and others.NORMATIVE personality tests like Big5 versions used at PlentyOfFish, eHarmony, Meetic Affinity, Parship, Be2, True are good for guidance (orientation) purposes but not good enough for predictive purposes. "Because the Big Five groups the more specific primary-level factors, feedback organized around the five Global Factor scales is more easily understood. For detailed feedback or predictive purposes, one should assess the more specific primary factors. Research has shown that more specific factors like the primary scales of the 16PF Questionnaire predict actual behavior better than the Big 5 Global Factors. For example, one extravert (a bold, fearless, high-energy type) may differ considerably from another (a sweet, warm, sensitive type), depending on the extraversion-related primary scale score patterns, so deeper analysis is typically warranted." Extracted from the 16PF5 Manual


Online Dating sites and Personality Based recommenders have very big databases, in the range of 20 000 000 (twenty million) profiles, so the Big 5 model is not enough for predictive purposes.
If they use the Big 5 model, the whole precision is less than you could achieve searching by your own!!!


The entire Online Dating Industry for serious daters in 1st World Countries is a HOAX, performing as a Big Online Casino, with a low effectiveness/efficiency level of their matching algorithms (less than 10%), in the same range as searching by your own.
Actual online dating sites offering compatibility matching methods are only fueled by big marketing budgets and not by serious scientific evidence. No one ( eHarmony, Chemistry, PerfectMatch, PlentyOfFish Chemistry Predictor, MeeticAffinity, Be2, RewardingLove, Parship, True, etc) can prove its matching algorithm can match prospective partners who will have more stable and satisfying relationships than couples matched by chance, astrological destiny, personal preferences, searching on one's own, or other technique as the control group in a peer_reviewed Scientific Paper for the majority (over 90%) of their members.

They are all like placebo, as:
* Actual online dating sites offering compatibility matching methods, when calculating compatibility between prospective mates, have less or at least the same precision as searching on one's own. [in the range of 3 or 4 persons compatible per 1,000 persons screened]
* That is because they use:
a) simplified versions of personality traits, instead of the 16PF5 or similar with the complete inventory (16 variables)
b) inadequate quantitative methods to calculate compatibility between prospective mates.

To solve that problem I propose:
1) the 16PF5 or similar normative personality test to measure personality of normal persons over 26 years old interested in serious dating.
No actual online dating site offering compatibility matching methods uses the 16PF5 normative test available in different languages.
2) a new quantitative method to calculate compatibility between prospective mates, based on quantized pattern comparison (part of pattern recognition by correlation)
The value of my algorithm is to achieve far more precision than searching on one's own [in the range of 3 persons compatible per 100,000 persons screened, 100 times better than actual competitors]

The only way to revolutionize the Online Dating Industry is using the 16PF5 normative personality test, available in different languages to assess personality of members, or a proprietary test with exactly the same traits of the 16PF5 and expressing compatibility with eight decimals (needs a quantized pattern comparison method, part of pattern recognition by cross-correlation, to calculate similarity between prospective mates.)
High precision in matching algorithms is precisely the key to open the door and leave the infancy of compatibility testing.