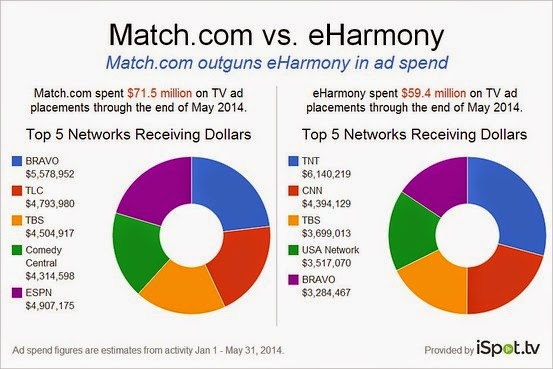 eHarmony Inc.’s matching algorithm is in the range of 3 persons shown as high compatible per 1,000 persons screened; exactly in the same range as searching by your own! Performing really as placebo.
eHarmony is a 14 years old obsolete site and a HOAX based on a big scientific FRAUD, because the normative Big Five model to measure personality of daters had been proven/revealed as an incomplete and incorrect model to measure personality of daters. Now replaced by HEXACO test, a.k.a Big Six test.
http://onlinedatingsoundbarrier.blogspot.com.ar/2014/05/lifeproject-method-versus-eharmony.html
C-level executives are cooking barbecues under the water (selling smoke) and not paying attention to latest research from Academics which could be beneficial for the Online Dating Industry.
Wasting precious time with Matchmakers which should be obsolete.
The Online Dating Industry needs to kill the Matchmaking Industry, like computers killed typewriters.
Worldwide there are less than 7 million paid members (adding up all the ones at eHarmony/EliteSingles/eDarling, Match, Chemistry, Meetic, MeeticAffinity, OkCupid, PeopleMedia’s Communities, PlentyOfFish, Parship/eCift, and others).

The key to long-lasting romance is STRICT PERSONALITY SIMILARITY.

Several times I had challenged eHarmony’s Team, Match’s Team, even PlentyOfFish owners to launch a new compatibility (personality profiling) site, using the normative 16PF test or similar in different languages.
I had also challenged them to show Compatibility Distribution Curves to each and every of its members!
http://onlinedatingsoundbarrier.blogspot.com.ar/2014/06/using-technology-and-psychology-to-make.html