Social change: For the first time there are more unmarried than married

Diario Clarín had published an interesting article about :
Social change: For the first time there are more unmarried than married
in Argentina. 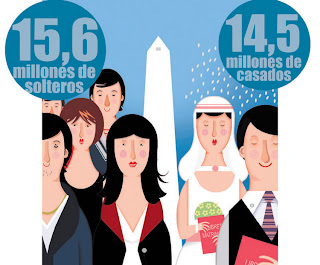 There are 15.6 million persons unmarried against 14.5 million persons married (separated, widowed, divorced) in Argentina.
Those singles do not want to marry, they want companionship, to find compatible real persons.
South American population is over 387 million persons and singles over 18 years old are over 100 million persons. Imagine all South American singles including Brazil, Argentina, Chile, Uruguay, Paraguay, Venezuela, Colombia, Ecuador, Peru, Bolivia for the Online Dating Market.
South America has a GDP (nominal, 2011) of over USD 4,176,712,000 (USD 4,17 Trillion)
And ............. online dating sites make coins as revenue because South America is an unserved / unexploited market.
Match/ParPerfeito/Meetic, Be2, Parship, eHarmony and others had been spending millions of USD since years and until now they do not understand the Latin/South American culture.
Several times I had suggested to Online Dating Companies wanting to enter (or already in) the Latin American Market (Mexico, Brazil, Colombia, Venezuela, Argentina, Uruguay, Paraguay, Chile, Bolivia, Peru) to offer pre paid cards as the primary option of payment.
Latin Americans do mostly not have credit cards. The ones who have credit cards, do mostly not use them for subscriptions to avoid automatic rebilling and identity theft.