NEW FRESH paper "Beyond the heritability of life satisfaction ..."

This new German paper is another big punch to .... behavioural matching algorithms and genetic matchmaking! 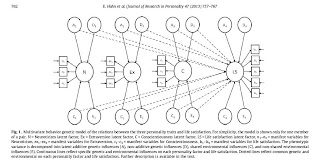 "Studies examining sources of individual differences in life satisfaction can be categorized in two main research directions. One implicates environmental factors, such as life circumstances and life events, and another emphasizes personality traits and genetic influences as important for life satisfaction.
On the one hand, life events (e.g., marriage, divorce, unemployment, birth of a child), life circumstances (e.g., cultural influences) and demographic factors (e.g., income, education) constitute external environmental factors.
On the other hand, several studies have shown that life satisfaction is consistently related to personality, suggesting the existence of a so-called "happy personality"
Although the specific correlations between personality traits and life satisfaction are moderate, the results of a meta-analysis by Steel, Schmidt, and Shultz (2008) showed that as much as 39% of the variance in quality of life measures can be explained by personality.

Like personality, life satisfaction showed substantial genetic influences (30–37%), both additive (14–17%) and non-additive (16–20%) in nature, supporting the idea of a genetically influenced baseline of satisfaction.
... we cannot conclude that satisfied parents were more likely to have satisfied children because of their shared genes if substantial non-additive genetic influences are involved.

In our multivariate behavior genetic analyses, we found that all genetic influences on life satisfaction were also genetic influences on personality.
.... we could not investigate spousal similarity in our sample to estimate the effect of assortative mating (i.e., the tendency to select a spouse with similar genotypes and/or phenotypes). Assortative mating could inflate estimates of shared environment because it increases genetic resemblance for DZ twins and siblings, and to lesser extents for mother–child and grandmother–child pairs but not for MZ twins."

What comes after the Social Networking wave?The Next Big Investment Opportunity on the Internet will be .... Personalization!Personality Based Recommender Systems and Strict Personality Based Compatibility Matching Engines for serious Online Dating with the normative 16PF5 personality test.
The market remains enormous!!
Publicado por FERNANDO_ARDENGHI en 6:30 PM