Imagine a NEW Legislation for Online Dating Sites to force them disclose how many active members they have (Premium members: paid or with gift subscriptions) ?
And also force them to conduct ID verification ?

That will improve dramatically the Online Dating Industry!

During 2008, a lawsuit against Parship in Belgium about "pratiques commerciales trompeuses" forced Parship to disclose how many paid members it had in Belgium (Parship lied about their customers; 80.000 announced, 5.004 in reality, a 6.25% conversion rate, the same to say over 93% inactive profiles!!! )
During January 2011, former CEO of Match LATAM Countries recognized 75% inactive profiles at Match Argentina.
New legislation can kill free/freemium sites.

Actually, the Online Dating Industry has no/weak Legislation, no ID verification, low reliable background checks, no Quality Norms.
No one compatibility matching method is Scientifically Proven.
BUT
A variety of new laws, or new interpretations of existing laws, could subject dating sites to claims or otherwise harm their business. (extracted from IAC SEC filing)

Do you remember ... ?
Dannon's Activia, DanActive health claims draw USD21 Million fine. Power Balance Bracelets lawsuit. The PIP breast implants scandal. The 2010 was the year of the "PIP scandal". Thousands of women throughout the world carrying a time bomb: prosthesis with uncertified gel, increased risk of rupture and leak into ganglions, increase risk of developing capsular contractures.
Also "Reebok Had to Pay USD25 Million in Customer Refunds To Settle FTC Charges of Deceptive Advertising of EasyTone and RunTone Shoes! "
A similar case is eHarmony,  a 13 years old site claiming to be "scientifically proven", and they have not got any proof of that! 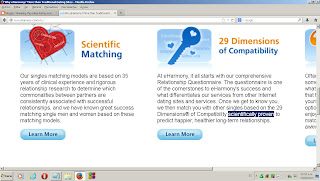 The Online Dating Industry is selling elixirs, tonics, snake oil liniments and other patent medicine and performing like the Pharmaceutical and Cosmetic Industry before the USA Food and Drug Administration was created where any player can make any claim without any credentials.

I live in a South American country and I am really astonished to see how online daters in "1st World" countries are really victims of human experimentation.

Email ThisBlogThis!Share to TwitterShare to FacebookShare to Pinterest
Etiquetas: news