First key, see world map like this! Because most probably your brain distorts! 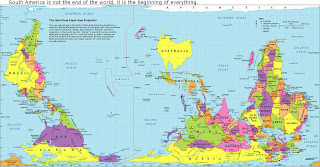 South America is not the end of the world, it is the beginning of everything: 90% of World population would die by 2050! (Olduvai theory) Best place to live will be South America by 2050.

More than 70% of people who own a cell phone in all Latin America, are pre-paid clients. They do not receive bills, they charge credit in their cell phones by 2 methods: Acquiring pre-paid cards at kiosks/drugstores or via virtual charge at kiosks/drugstores/supermarkets or at any place with a PosNet terminal (Banelco or Link)
The mobile concept evolving, meaning tablets with Wi-Fi Network access

Other local payment methods include:
paying by Western Union (in almost every local post office)
paying by Pago Fácil.

Email ThisBlogThis!Share to TwitterShare to FacebookShare to Pinterest
Etiquetas: article