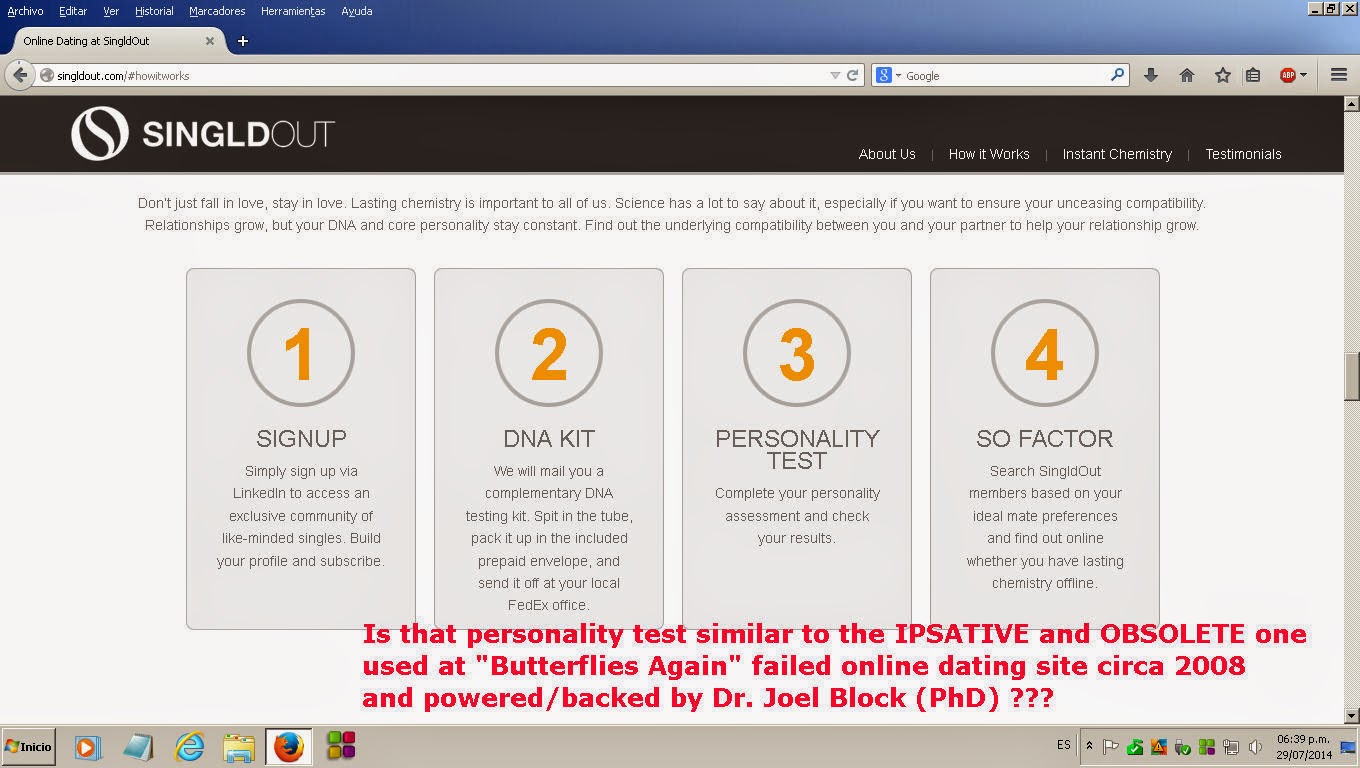 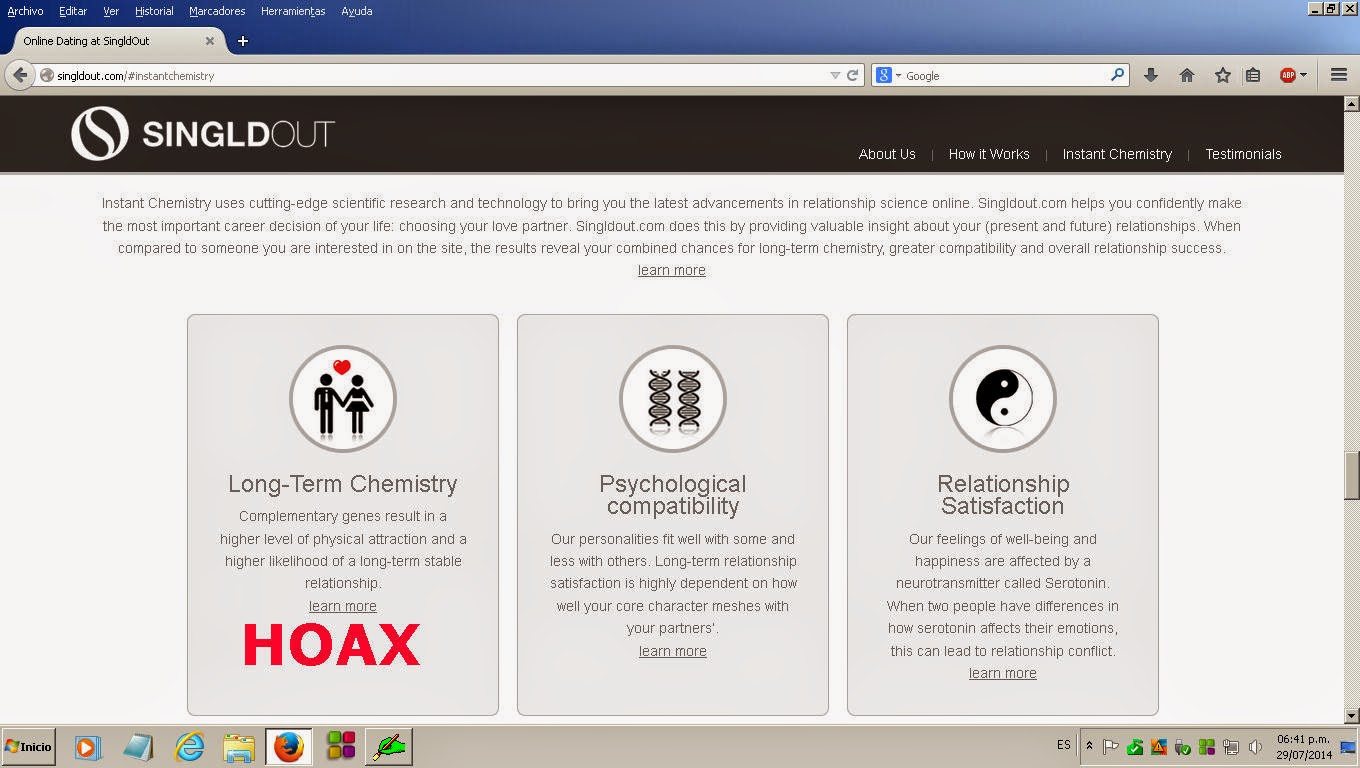 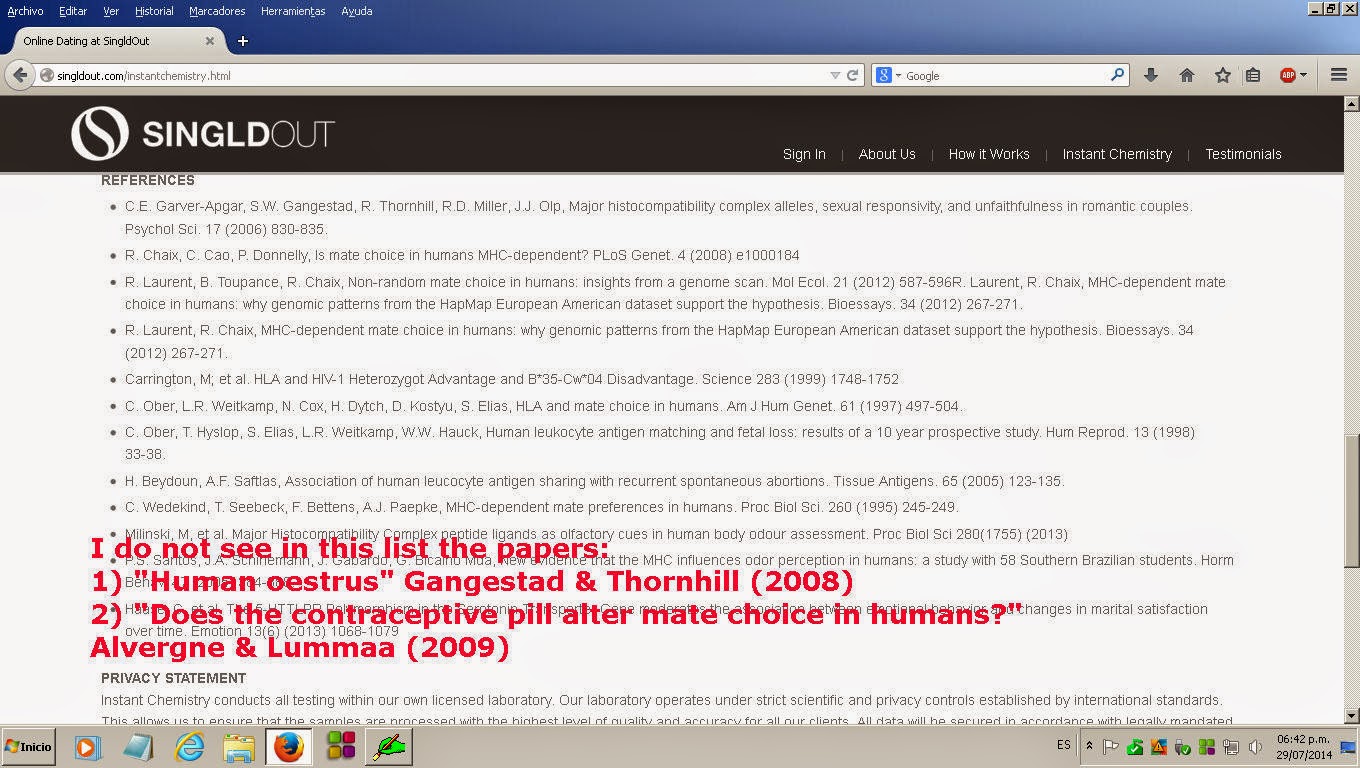 The CEO is NOT HONEST because "SingldOut Offers Genetic Matchmaking" but ...
that proposal is a HOAX, a big FRAUD in the Online Dating Industry.
Genetic Matchmaking is mainly  based on the T_shirt Experiment that only proved:
normally cycling women (not pregnant and not taking contraceptive pills) are (temporarily) attracted by the perspiration scent of clothes used by men with a Major Histocompatibility Complex MHC more dissimilar to theirs,
and not proved: women attracted by those men for long term mating with commitment.
and
2 Scientific Papers debunk their claims.
1) "Human oestrus" Gangestad & Thornhill (2008)
"Only short-term but not long-term partner preferences tend to vary with the menstrual cycle"

2) "Does the contraceptive pill alter mate choice in humans?" Alvergne & Lummaa (2009)
".. whereas normally cycling women express a preference for MHC (Major Histocompatibility Complex) dissimilarity in mates, pill users prefer odours of MHC-SIMILAR men, indicating that pill use might eliminate adaptive preferences for genetic dissimilarity."
................
"...., Roberts et al. attempted to eliminate these potential confounds by adopting a within-subject design in which women's mate preferences were assessed before and after they began taking the pill. Women starting the pill showed a significant preference shift towards MHC SIMILARITY compared with three months before the pill was taken, a shift that was not observed in the control group of normally cycling women."
http://onlinedatingsoundbarrier.blogspot.com.ar/2014/07/about-dna-matching-instant-chemistry.html
http://onlinedatingsoundbarrier.blogspot.com.ar/2014/07/more-about-dna-matching-instant.html

What is important in attracting people to one another may not be important in making couples happy.
"Opposites attract but then they attack", Dr Buckwalter's dixit.
Persons with opposites characteristics feel attraction between them for short_term mating.
Persons with similar characteristics are more suitable/qualified for long_term mating.
http://www.onlinepersonalswatch.com/news/2008/04/science-of-love.html

As per the personality test used in the SingldOut site, most probably it is a IPSATIVE test quite similar to the one used at "Butterflies Again" dating site circa 2008.
http://onlinedatingpost.com/archives/2008/09/dating-site-personality-testing-smackdown/

Please see also:
WE HAVE CHEMISTRY! ??? NOT
http://onlinedatingsoundbarrier.blogspot.com.ar/2013/01/we-have-chemistry-not.html

Chemistry, 6 years from its genesis.
http://onlinedatingsoundbarrier.blogspot.com.ar/2010/12/chemistry-6-years-from-its-genesis.html

10 years ago, during December 2004, Dr. Helen Fisher was contacted by the people from Match to create Chemistry, the last innovation at Match, a compatibility matching method.


The key to long-lasting romance is STRICT PERSONALITY SIMILARITY.
C-Level executives are more worried about their golf scores than their company’s long term strategy and innovations. http://onlinedatingsoundbarrier.blogspot.com.ar/2013/01/from-idate2004-to-idate2013-final.html C-level executives are cooking barbecues under the water (selling smoke) and not paying attention to latest research from Academics which could be beneficial for the Online Dating Industry.
Lack Of Innovation & Decadence can summarize the Online Dating Industry for years. http://onlinedatingsoundbarrier.blogspot.com.ar/2013/09/top-86-tips-from-idate-2013-cologne-koln.html The Online Dating Industry is performing like the Pharmaceutical and Cosmetic Industry before the USA Food and Drug Administration was created. There is no/weak Legislation, no ID verification, low reliable background checks, no Quality Norms. No one compatibility matching method is Scientifically Proven. The entire Online Dating Industry for serious daters in 1st World Countries is a HOAX, performing as a Big Online Casino, with a low effectiveness/efficiency level of their matching algorithms (less than 10%). In the same range as searching by your own. The Online Dating Industry needs a major cataclysm to extinguish the big, old and obsolete dinosaurs. http://onlinedatingsoundbarrier.blogspot.com.ar/2014/05/internet-trends-report-2014-from-kpcb.html