The BIG5 normative personality test is the biggest mistake Psychologists made since several years ago. The BIG5 is also known as the Five Factor Model theory of personality traits, a psychological model based on research by Paul Costa and Robert McCrae.

Remember:
IPSATIVE personality tests are OBSOLETE (self-descriptive questionnaires) and should be discarded, not to use in online dating sites like: MBTI (PerfectMatch), DISC (ThomasKnowsPeople), Enneagram (Dopasowani) or other proprietary ipsative tests like the ones used at Chemistry, ButterfliesAgain, Doskonalapara, PembePanjur, LittleHint, oneGoodLove and others.
I had reviewed over 55 compatibility matching engines intended for serious dating since 2003, when I had discovered "the online dating sound barrier" problem.

NORMATIVE personality tests like BIG5 versions used at PlentyOfFish, True, eHarmony/TeAmo, MeeticAffinity, Parship, Be2, and others; are good for guidance (orientation) purposes but not good enough for predictive purposes.
"Because the BIG5 groups the more specific primary-level factors, feedback organized around the five Global Factor scales is more easily understood. For detailed feedback or predictive purposes, one should assess the more specific primary factors. Research has shown that more specific factors like the primary scales of the 16PF Questionnaire predict actual behavior better than the BIG5 Global Factors. For example, one extravert (a bold, fearless, high-energy type) may differ considerably from another (a sweet, warm, sensitive type), depending on the extraversion-related primary scale score patterns, so deeper analysis is typically warranted." Extracted from the 16PF5 Manual

Online Dating sites have very big databases, in the range of 20,000,000 (twenty million) profiles, so the BIG5 model is not enough for predictive purposes.
eHarmony is the OLDEST site in the Online Dating Industry using the BIG5 test.
eHarmony is a 13+ years old obsolete site, a HOAX, based on a Big Scientific Fraud. 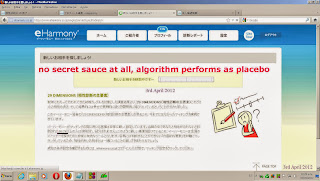 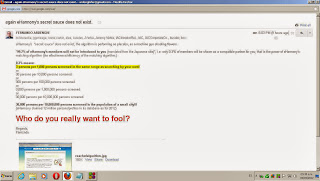 The ENSEMBLE of the BIG5 model is 100,000. If you suppose a normal distribution of personality in a 20,000,000 (twenty million) database of persons, 200 or more persons will be seen as THE SAME, i.e:
20,000,000/100,000 = 200  All Database is 200 times bigger than the ensemble.
Over 60,000 persons will be seen as NEARLY the SAME. Only 0.3% of the database.
Do you remember when eHarmony Japan disclosed "99.7% of eHarmony’s members will not be introduced to you (translated from the failed Japanese site)", i.e. only 0.3% of members will be shown as a compatible partner for you; that is the power of eHarmony's matching algorithm (the effectiveness/efficiency of the matching algorithm.)
0.3% means: 3 persons per 1,000 persons screened in the same range as searching by your own! eHarmony's matching algorithm performs really as placebo.

That explanation shows you why any online dating site using the BIG5 model has a whole precision in the same range or less than you could achieve searching by your own!!!

Now it seems, some Psychologists had understood that mistake, to use the BIG5 normative personality test for online dating purposes and began to encourage the use of other tests,
like
California Psychological Inventory (CPI)
and
The Millon Index of Personality Styles-Revised (MIPS Revised)

but my best recommendation is, of course, the 16PF5 normative personality test.
Nor the CPI nor the MIPS can outperform the 16PF5.

The only way to revolutionize the Online Dating Industry is using the 16PF5 normative personality test, available in different languages to assess personality of members, or a proprietary test with exactly the same traits of the 16PF5 and expressing compatibility with eight decimals (needs a quantized pattern comparison method, part of pattern recognition by cross-correlation, to calculate similarity between prospective mates.)

Email ThisBlogThis!Share to TwitterShare to FacebookShare to Pinterest
Etiquetas: news