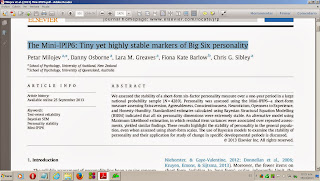 We assessed the stability of a short-form six-factor personality measure over a one-year period in a large national probability sample (N = 4289). Personality was assessed using the Mini-IPIP6—a short-form measure assessing Extraversion, Agreeableness, Conscientiousness, Neuroticism, Openness to Experience, and Honesty-Humility. Standardized estimates calculated using Bayesian Structural Equation Modelling (BSEM) indicated that all six personality dimensions were extremely stable. An alternative model using Maximum Likelihood estimation, in which residual item variances were associated over repeated assessments, yielded similar findings. These results highlight the stability of personality in the general population, even when assessed using short-form scales. The use of Bayesian models to examine the stability of personality and their application for study of change in specific developmental periods is discussed.

1.3. Six-factor model of personality
While the Big-Five has been the dominant approach in personality research for over two decades, recent investigations have identified a sixth independent personality dimension referred to as Honesty-Humility (Ashton & Lee, 2007, 2009). The six independent factors then are: Honesty-Humility (H), Emotionality (E), Extraversion (X), Agreeableness (A), Conscientiousness (C), and Openness to Experience (O). This six dimension model, referred to as the HEXACO model, is argued to account for cross-cultural lexical findings, as well the subtle distinctions between personality traits better than the Big-Five (Ashton & Lee, 2007). The original measurement scale of this model consists of the 60-item HEXACO-60 scale (Ashton & Lee, 2009).


Do you remember my previous post about?
BIG5 normative personality test is OBSOLETE

Personality traits are highly stable in persons over 25 years old to 45 years old (the group of persons who could be most interested in serious online dating) They have only minor changes in personality (less than 1 interval in a normative test) and the 16PF5 test will not "see" them because the output of the 16PF5 test are 16 variables STens (Standard Tens) taking integer values from 1 to 10. STens divide the score scale into ten units. STens have the advantage that they enable results to be thought of in terms of bands of scores, rather than absolute raw scores. These bands are narrow enough to distinguish statistically significant differences between candidates, but wide enough not to over emphasize minor differences between candidates.