More about "The HEXACO" model of personality structure 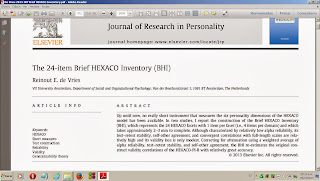 The HEXACO Model of Personality conceptualizes human personality in terms of six dimensions.

The HEXACO model of personality structure is a six-dimensional model of human personality that was created by Ashton and Lee based on findings from a series of lexical studies involving several European and Asian languages. The six factors, or dimensions, include Honesty-Humility (H), Emotionality (E), Extraversion (X), Agreeableness (A), Conscientiousness (C), and Openness to Experience (O)

The HEXACO model of personality is, of course, an oversimplification like the Big5 model, good enough to guidance/orientation purposes but not good enough for predictive purposes.

---------------------
The only way to revolutionize the Online Dating Industry is using the 16PF5 normative personality test, available in different languages to assess personality of members, or a proprietary test with exactly the same traits of the 16PF5 and expressing compatibility with eight decimals (needs a quantized pattern comparison method, part of pattern recognition by cross-correlation, to calculate similarity between prospective mates.)