PAPER "Quantifying the association between personality similarity and marital adjustment .. " 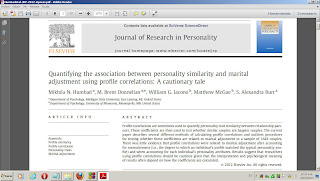 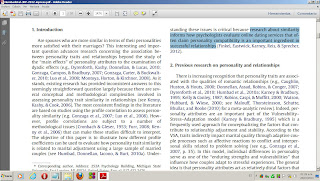 "Are spouses who are more similar in terms of their personalities more satisfied with their marriages?" Short answer, yes.

"... research about similarity informs how psychologists evaluate online dating services that often claim personality compatibility is an important ingredient in successful relationships" (I add Actual matching algorithms used by eHarmony, Chemistry, PlentyOfFish and others, even behavioural recommender systems, can not be improved, they need to be discarded NOW.)

The above paper is also related to the paper "Is spousal similarity for personality a matter of convergence or selection?"


First thing I do when receiving any paper is to read the title, then the abstract and check bibliography cited.

In this case I was surprised to see some importants papers not even cited like:

"Only the congruent survive - Personality similarities in couples. Personality and Individual Differences" 2008 Rammstedt and Schupp.

"Personality, Partner Similarity and Couple Satisfaction: Do Opposites Attract or Birds of a Feather Flock Together?"  2011 Adrienne Kaufman

"It's that time of the month: The effects of hormonal shifts on female mate value, depressive symptomology, and short term mating orientation." 2011 Heather Adams and Victor Luévano.

From the paper "METHODOLOGICAL AND DATA ANALYTIC ADVANCES IN THE STUDY OF INTERPERSONAL RELATIONSHIPS: INTRODUCTION TO THE SPECIAL ISSUE"

At page 413 says: "It is vital for the study of personal relationships, as for any scientific discipline, to develop methodologies that are specifically designed to address the questions posed by the discipline. The articles in this special issue represent an effort in that direction. Perhaps equally important is the need for individuals who are involved in relationships study to learn these new techniques and to apply them in their research. It is also important for investigators to challenge statisticians to create new analytic techniques when existing ones are inadequate. These tasks are left to you, the reader."

That is because I had invented a new quantitative method to calculate similarity.


In compatibility matching algorithms there are 2 steps:
1) to measure personality traits or other variables.
2) to calculate compatibility between prospective mates.

Also there is a similarity trilogy between genetic, mate choice and personality based recommender systems.

Email ThisBlogThis!Share to TwitterShare to FacebookShare to Pinterest
Etiquetas: articles in newspapers, papers