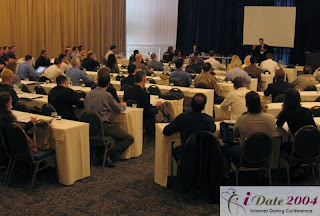 4) The biggest scammers are not from Ghana or Nigeria.
Some dating sites, what all they did since 1995 until now, were scamming paying members with marketing and credit card billing trickery. The Online Dating Industry needs a major earthquake or a major cataclysm to extinguish those large dinosaurs.

5) C-Level executives are more worried about their golf scores than their company's long term strategy and innovations. They attend iDate conferences to discuss stupidities, like if Annie is pregnant or not, but not talking about Innovations, Legislation, ID verification, background checks, Quality Norms for the Online Dating Industry (the Big Agenda).

6) No innovations since years for the Online Dating Industry.
The entire Online Dating Industry for serious daters in 1st World Countries is a HOAX, performing as a Big Online Casino, with a low effectiveness/efficiency level of their matching algorithms (less than 10%), in the same range as searching by your own.
Innovations are not adding more bells and whistles to actual online dating sites.
The Online Dating Industry is waiting for the innovative compatibility matching method which can kill the Matchmaking Industry and other Offline Dating Proposals.
The Online Dating Industry needs innovations. But innovations will definitively come from new discoveries on Theories of Romantic Relationships Development.
I) Several studies showing contraceptive pills users make different mate choices, on average, compared to non-users.
II) People often report partner preferences that are not compatible with their choices in real life. (Behavioural recommender systems or other system that learns your preferences are useless)
III) The STRICT personality similarity axis: compatibility is all about a high level on personality* similarity* between prospective mates for long term mating with commitment.
*personality measured with a normative test.
*similarity: there are different ways to calculate similarity, it depends on how mathematically is defined.
Also Personality Based Recommender Systems are the next generation of recommender systems because they perform FAR better than Behavioural ones (past actions and pattern of personal preferences)
That is the only way to improve recommender systems, to include the personality traits of their users and they need to calculate personality similarity between them.


Without offering the NORMATIVE16PF5 (or similar test measuring exactly the 16 personality factors) for serious dating, it will be impossible to innovate and revolutionize the Online Dating Industry
All other proposals are NOISE and perform as placebo.