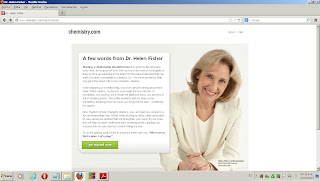 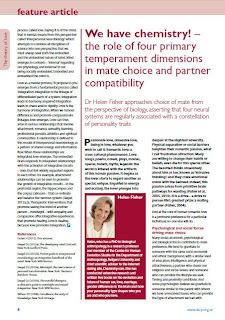 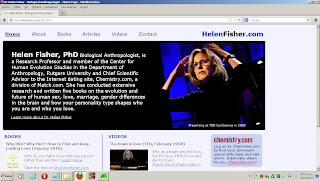 8 long years ago, during December 2004, Dr. Helen Fisher was contacted by the people from Match to create Chemistry, the last innovation at Match, a compatibility matching method.

The success rate* of Chemistry is less than 6%. The majority of their members are not going to achieve a long term relationship with commitment (or marriage) using that site.
*success rate == percentage of persons who leave the site because they found someone compatible.

There is no Scientifc Paper, peer reviewed by Academics from different Universities (public scrutiny of findings) showing Chemistry's matching algorithm can match prospective partners who will have more stable and satisfying relationships than couples matched by chance, astrological destiny, personal preferences, searching on one's own, or other technique as the control group AND there never will be any paper because IPSATIVE personality tests like the proprietary one used at Chemistry are OBSOLETE (self-descriptive questionnaires) and should be discarded.

I had applied reverse engineering and discovered that Chemistry is in the range of 3 or 4 persons as highly compatible per 1,000 persons screened, the same range any person can achieve by searching on one's own or mutual filtering methods (recommendation engines).
IPSATIVE personality tests are OBSOLETE (self-descriptive questionnaires) and should be discarded: MBTI (PerfectMatch), DISC (ThomasKnowsPeople), Enneagram (Dopasowani) or other proprietary ipsative tests like the ones used at Chemistry, ButterfliesAgain, Doskonalapara, PembePanjur, LittleHint, oneGoodLove and others.NORMATIVE personality tests like Big5 versions used at PlentyOfFish, eHarmony , Meetic Affinity, Parship, Be2, True are good for orientative purposes but not good enough for predictive purposes.eHarmony, True, PerfectMatch, MeeticAffinity, Parship, Be2, PlentyOfFish, Chemistry and others are in the range of 3 to 4 persons compatible per 1,000 persons screened. Any member of those sites receives on average 3 to 4 prospective mates as compatible for dating purposes per 1,000 (one thousand) members screened in the database. So in a 10,000,000 persons database, any member will see 30,000 to 40,000 members as highly compatible; 30,000 persons is the population of an average small city. Any person can achieve 3 to 4 persons as highly compatible per 1,000 persons screened, searching by his/her own or by mutual filtering methods!eHarmony , True, PerfectMatch, MeeticAffinity, Parship, Be2, PlentyOfFish, Chemistry and others have a low effectiveness/efficiency level of their matching algorithms.The Online Dating Industry does not need a 10% improvement, a 50% improvement or a 100% improvement. It does need "a 100 times better improvement"

Actual matching algorithms used by eHarmony, Chemistry, PlentyOfFish and others, even behavioural recommender systems, can not be improved, they need to be discarded NOW.
Publicado por FERNANDO_ARDENGHI en 10:01 PM

Email ThisBlogThis!Share to TwitterShare to FacebookShare to Pinterest
Etiquetas: articles