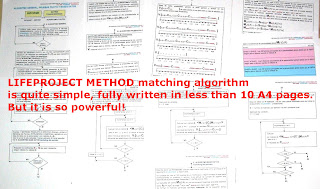 The Journalist Dan Slater had written the book "Love in the Time of Algorithms: What Technology Does to Meeting and Mating", but he analyzed actual online dating sites like eHarmony, PerfectMatch, Chemistry, PlentyOfFish, MeeticAffinity, True and others offering compatibillity matching methods which are obsolete since years!


The writer and journalist Lori Gottlieb (March 2006) noted about the growing number of Internet dating sites that are using the science of attraction to match singles: "their efforts mark the early days of a social experiment of unprecedented proportions, involving millions of couples and possibly extending over the course of generations". I agreed and said: The entire Online Dating Industry for serious daters in 1st World Countries is a HOAX, performing as a Big Online Casino, with low successful rates.
The Online Dating Industry is performing like the Pharmaceutical and Cosmetic Industry before the USA Food and Drug Administration was created. The Online Dating Industry is selling elixirs, tonics, snake oil liniments and other patent medicine.

Sometimes I read posts about a "fairly complex matching algorithm" for online dating
or
receive emails promoting "a sophisticated algorithm" and then I laugh!!!
Matching algorithms do not need to be complex or sophisticated, they need to be effective.
From Merriam-Webster Dictionay:
effective (Synonyms: effectual, efficacious, efficient, fruitful, operative, potent, productive):
a : producing a decided, decisive, or desired effect.

Those complex or sophisticated matching algorithms are like the Wright R-3350 Duplex-Cyclone used in the Boeing B-29 Superfortress, useless at all to ....... break sound barrier!!!


Actual matching algorithms used by eHarmony, Chemistry, PlentyOfFish and others, even behavioural recommender systems, can not be improved, they need to be discarded NOW. Because they are in the range of 3 to 4 prospective mates as selected / recommended / compatible for dating purposes per 1,000 members screened in the database. They all 3 are performing the same for serious daters, with a high percentage of false positives, like gun machines firing flowers.
They can not break the online dating sound barrier!
You do not need to improve a piston engine when you need a jet engine to break sound barrier.

That range convergence phenomenon is what I had called "the online dating sound barrier", in 2003, when I had discovered than problem, 10 long years ago.
LIFEPROJECT METHOD is so simple!
It is only strict personality similarity. A Scramjet engine.

Scramjet (supersonic combustion ramjet)
Unlike a typical jet engine, such as a turbojet or turbofan engine, a scramjet does not use rotating, fan-like components to compress the air. No moving parts are needed in a scramjet, which greatly simplifies both the design and operation of the engine. In comparison, typical turbojet engines require inlet fans, multiple stages of rotating compressor fans, and multiple rotating turbine stages, all of which add weight, complexity, and a greater number of failure points to the engine. It is this simplicity that allows scramjets to operate at such high velocities, as the conditions encountered in hypersonic flight severely hamper the operation of conventional turbomachinery.

The scramjet can efficiently operate at extremely high speeds: theoretical projections place the top speed of a scramjet between Mach 12 and Mach 24, which is near orbital velocity.


Without offering the NORMATIVE16PF5 (or similar test measuring exactly the 16 personality factors) for serious dating, it will be impossible to innovate and revolutionize the Online Dating Industry
All other proposals are NOISE and perform as placebo.
Publicado por FERNANDO_ARDENGHI en 5:36 PM