As predicted in this blog with first hand information, LikeIt (TheCompleteMe) GAME OVER next April 30th 2013 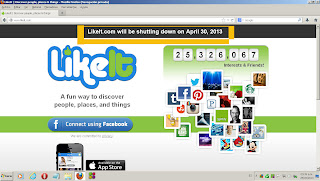 LikeIt (TheCompleteMe): a "Stupid Investors' series" case of study!!!
Former executives from online dating sites are not entrepreneurs. Those former executives can cook a barbecue under the water, they are smoke sellers, but they are not going to innovate in nothing.

Social dating is vaporware. Online Dating for serious daters does not need to be more social, it needs to be more effective/efficient. It needs to reduce the false positives problem.
Innovations are not adding more bells and whistles to actual online dating sites.
The Online Dating Industry needs innovations but they will come from only one source: the latest discoveries in theories of romantic relationships development with commitment.
Compatibility is all about a high level on personality* similarity* between prospective mates for long term mating with commitment.
*personality measured with a normative test.
*similarity: there are different ways to calculate similarity, it depends on how mathematically is defined.
STRICT PERSONALITY SIMILARITY and not "meet other people with similar interests"
-----------------

I had reviewed over 55 compatibility matching engines intended for serious dating since 2003, when I had discovered "the online dating sound barrier" problem.
The only way to revolutionize the Online Dating Industry is using the 16PF5 normative personality test, available in different languages to assess personality of members, or a proprietary test with exactly the same traits of the 16PF5 and expressing compatibility with eight decimals (needs a quantized pattern comparison method, part of pattern recognition by cross-correlation, to calculate similarity between prospective mates.)

If you live in the Northern Hemisphere, see why your brain distorts.

What comes after Social Networking?
My bet: The Next Big Investment Opportunity on the Internet will be .... Personalization!
Personality Based Recommender Systems and Strict Personality Based Compatibility Matching Engines for serious Online Dating with the normative 16PF5 personality test.