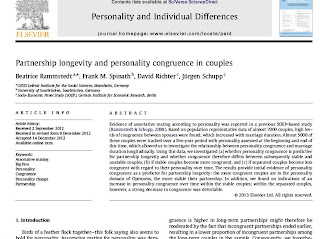 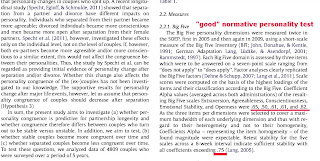 "Birds of a feather flock together—this folk saying also seems to hold for personality. Assortative mating for personality was demonstrated in a previous study (Rammstedt & Schupp, 2008) based on population-representative data of almost 7,000 couples, as well as in several other studies based on somewhat smaller and/or more selective samples (e.g., Bleske-Rechek, Remiker, & Baker, 2009; Gonzaga, Carter, & Buckwalter, 2010; McCrae et al., 2008).
..................

..... we hypothesize personality congruence to be predictive for partnership longevity and assume congruence to be higher in couples who turn out to be stable than in couples separating in the years thereafter (Hypothesis 1). On the other hand, it could be argued that longterm couples become more similar in their personalities over time. For example, for someone less open to experience than his or her partner, joining this partner in cultural activities might make him or her more interested and thus more open. We could therefore assume a personality change towards higher congruence over time in stable couples (Hypothesis 2). However, neither of the two alternative hypotheses is supported by data from previous studies. Gonzaga, Carter, and Buckwalter (2010), using data from an online relationship service [eHarmony], and Caspi, Herbener, and Ozer (1992), using data from the 20-year Kelly Longitudinal Study of couples, found no evidence that couples' resemblance increased over time.

[Similarity is a word that has different meanings for different persons or companies, it exactly depends on how mathematically is defined. I calculate similarity in personality patterns with (a proprietary) pattern recognition by correlation method. It takes into account the score and the trend to score of any pattern. ]


Please see:
"Stability and change of personality across the life course"
and
"personality traits are highly stable"

Remember:
Personality traits are highly stable in persons over 25 years old to 45 years old (the group of persons who could be most interested in serious online dating) They have only minor changes in personality (less than 1 interval in a normative test) and the 16PF5 test will not "see" them because the output of the 16PF5 test are 16 variables STens (Standard Tens) taking integer values from 1 to 10. STens divide the score scale into ten units. STens have the advantage that they enable results to be thought of in terms of bands of scores, rather than absolute raw scores. These bands are narrow enough to distinguish statistically significant differences between candidates, but wide enough not to over emphasize minor differences between candidates.

"Only the congruent survive - Personality similarities in couples. Personality and Individual Differences" 2008 Rammstedt and Schupp.

"Personality, Partner Similarity and Couple Satisfaction: Do Opposites Attract or Birds of a Feather Flock Together?"  2011 Adrienne Kaufman

"Perceptions of Ideal and Former Partners' Personality and Similarity" 2010 Pieternel Dijkstra / D. P. H. Barelds. "The present study's results, as well as the results found in previous studies (e.g., Eastwick & Finkel, 2008), may be used to educate people, especially singles, about what really matters in long-term relationships, for instance, similarity in personality, instead of complementarity."

"It's that time of the month: The effects of hormonal shifts on female mate value, depressive symptomology, and short term mating orientation." 2011 Heather Adams and Victor Luévano.

From the paper "METHODOLOGICAL AND DATA ANALYTIC ADVANCES IN THE STUDY OF INTERPERSONAL RELATIONSHIPS: INTRODUCTION TO THE SPECIAL ISSUE"

At page 413 says: "It is vital for the study of personal relationships, as for any scientific discipline, to develop methodologies that are specifically designed to address the questions posed by the discipline. The articles in this special issue represent an effort in that direction. Perhaps equally important is the need for individuals who are involved in relationships study to learn these new techniques and to apply them in their research. It is also important for investigators to challenge statisticians to create new analytic techniques when existing ones are inadequate. These tasks are left to you, the reader."

That is because I had invented a new quantitative method to calculate similarity.


In compatibility matching algorithms there are 2 steps:
1) to measure personality traits or other variables.
2) to calculate compatibility between prospective mates.

Also there is a similarity trilogy between genetic, mate choice and personality based recommender systems.