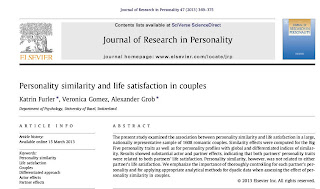 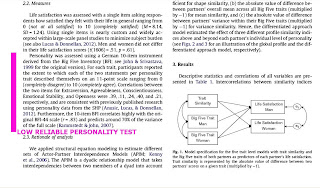 [Similarity is a word that has different meanings for different persons or companies, it exactly depends on how mathematically is defined. I calculate similarity in personality patterns with (a proprietary) pattern recognition by correlation method. It takes into account the score and the trend to score of any pattern. ]

The paper "Only the congruent survive - Personality similarities in couples. Personality and Individual Differences" Rammstedt & Schupp (2008), was not EVEN cited.

Also the papers written by  Dr. Pieternel Dijkstra, not EVEN cited.
"Our findings may help understand why so many relationships end in divorce due to mismatches in personality."
"Discussion
Our findings strongly support the 'similarity-attraction' hypothesis: Individuals clearly desire a potential partner with a similar personality. In addition to finding a mate with a similar personality, our study showed that individuals seek a mate who is slightly 'better' than they are: They prefer a mate who is somewhat less neurotic, more agreeable, more conscientious, more open and more extraverted than they are themselves.
.... mismatches in personality are a frequently mentioned cause for relationship break-up. If former partners indeed have dissimilar personalities, our findings underline how difficult it is for many people to select a mate with a similar personality, or, alternatively, how little value individuals put on finding a similar partner in terms of personality.
The present study's results, as well as the results found in previous studies (e.g., Eastwick & Finkel, 2008), may be used to educate people, especially singles, about what really matters in long-term relationships, for instance, similarity in personality, instead of complementarity."


Next post will be about the NEW PAPER "Partnership longevity and personality congruence in couples" Rammstedt, Schupp et al. (2013)

Please read also:
"Stability and change of personality across the life course"
and
"personality traits are highly stable"

Remember:
Personality traits are highly stable in persons over 25 years old to 45 years old (the group of persons who could be most interested in serious online dating) They have only minor changes in personality (less than 1 interval in a normative test) and the 16PF5 test will not "see" them because the output of the 16PF5 test are 16 variables STens (Standard Tens) taking integer values from 1 to 10. STens divide the score scale into ten units. STens have the advantage that they enable results to be thought of in terms of bands of scores, rather than absolute raw scores. These bands are narrow enough to distinguish statistically significant differences between candidates, but wide enough not to over emphasize minor differences between candidates.

The 3 milestone discoveries of the 2001 - 2010 decade for Theories of Romantic Relationships Development are:

I) Several studies showing contraceptive pills users make different mate choices, on average, compared to non-users. "Only short-term but not long-term partner preferences tend to vary with the menstrual cycle"
II) People often report partner preferences that are not compatible with their choices in real life. (Behavioural recommender systems or other system that learns your preferences are useless)
III) What is important in attracting people to one another may not be important in making couples happy. Compatibility is all about a high level on personality similarity between prospective mates for long term mating with commitment.

The only way to revolutionize the Online Dating Industry is using the 16PF5 normative personality test, available in different languages to assess personality of members, or a proprietary test with exactly the same traits of the 16PF5 and expressing compatibility with eight decimals (needs a quantized pattern comparison method, part of pattern recognition by cross-correlation, to calculate similarity between prospective mates.)


Without offering the NORMATIVE16PF5 (or similar test measuring exactly the 16 personality factors) for serious dating, it will be impossible to innovate and revolutionize the Online Dating Industry
All other proposals are NOISE and perform as placebo.
Publicado por FERNANDO_ARDENGHI en 3:16 AM