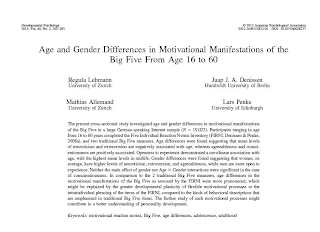 The present cross-sectional study investigated age and gender differences in motivational manifestations of the Big Five in a large German-speaking Internet sample (N = 19,022). Participants ranging in age from 16 to 60 years completed the Five Individual Reaction Norms Inventory (FIRNI; Denissen & Penke,2008a), and two traditional Big Five measures. Age differences were found suggesting that mean levels of neuroticism and extraversion are negatively associated with age, whereas agreeableness and conscientiousness are positively associated. Openness to experience demonstrated a curvilinear association with age, with the highest mean levels in midlife. Gender differences were found suggesting that women, on average, have higher levels of neuroticism, extraversion, and agreeableness, while men are more open to experience. Neither the main effect of gender nor Age x Gender interactions were significant in the case of conscientiousness. In comparison to the 2 traditional Big Five measures, age differences in the motivational manifestations of the Big Five as assessed by the FIRNI were more pronounced, which might be explained by the greater developmental plasticity of flexible motivational processes or the intraindividual phrasing of the items of the FIRNI, compared to the kinds of behavioral descriptions that are emphasized in traditional Big Five items. The further study of such motivational processes might contribute to a better understanding of personality development.

Please read also:
"Stability and change of personality across the life course"
and
"personality traits are highly stable"

Remember:
Personality traits are highly stable in persons over 25 years old to 45 years old (the group of persons who could be most interested in serious online dating) They have only minor changes in personality (less than 1 interval in a normative test) and the 16PF5 test will not "see" them because the output of the 16PF5 test are 16 variables STens (Standard Tens) taking integer values from 1 to 10. STens divide the score scale into ten units. STens have the advantage that they enable results to be thought of in terms of bands of scores, rather than absolute raw scores. These bands are narrow enough to distinguish statistically significant differences between candidates, but wide enough not to over emphasize minor differences between candidates.
Publicado por FERNANDO_ARDENGHI en 5:05 PM