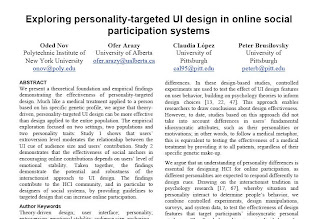 We present a theoretical foundation and empirical findings demonstrating the effectiveness of personality-targeted design. Much like a medical treatment applied to a person based on his specific genetic profile, we argue that theorydriven, personality-targeted UI design can be more effective than design applied to the entire population. The empirical exploration focused on two settings, two populations and two personality traits: Study 1 shows that users' extroversion level moderates the relationship between the User Interface (UI) cue of audience size and users' contribution. Study 2 demonstrates that the effectiveness of social anchors in encouraging online contributions depends on users' level of emotional stability. Taken together, the findings demonstrate the potential and robustness of the interactionist approach to UI design.