About Instant Chemistry Canadian based company 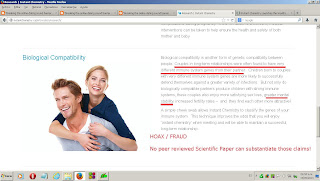 They now offer the same as Basisnote, GenePartner, ScientificMatch and other proposals offering DNA matching which are only based on the T_shirt Experiment that only proved:
normally cycling women (not pregnant and not taking contraceptive pills) are (temporarily) attracted by the perspiration scent of clothes used by men with a Major Histocompatibility Complex MHC more dissimilar to theirs,
and not proved: women attracted by those men for long term mating with commitment.
and
2 Scientific Papers debunk their claims.
1) "Human oestrus" Gangestad & Thornhill (2008)
"Only short-term but not long-term partner preferences tend to vary with the menstrual cycle"

2) "Does the contraceptive pill alter mate choice in humans?" Alvergne & Lummaa (2009)
".. whereas normally cycling women express a preference for MHC (Major Histocompatibility Complex) dissimilarity in mates, pill users prefer odours of MHC-SIMILAR men, indicating that pill use might eliminate adaptive preferences for genetic dissimilarity."
................
"Recently, Roberts et al. attempted to eliminate these potential confounds by adopting a within-subject design in which women's mate preferences were assessed before and after they began taking the pill. Women starting the pill showed a significant preference shift towards MHC SIMILARITY compared with three months before the pill was taken, a shift that was not observed in the control group of normally cycling women."

The Online Dating Industry needs innovations but they will come from only one source: the latest discoveries in theories of romantic relationships development with commitment: STRICT PERSONALITY SIMILARITY and not "meet other people with similar interests"
The 3 milestone discoveries of the 2001 - 2010 decade for Theories of Romantic Relationships Development are:
I) Several studies showing contraceptive pills users make different mate choices, on average, compared to non-users. "Only short-term but not long-term partner preferences tend to vary with the menstrual cycle"
II) People often report partner preferences that are not compatible with their choices in real life. (Behavioural recommender systems or other system that learns your preferences are useless)
III) What is important in attracting people to one another may not be important in making couples happy. Compatibility is all about a high level on personality similarity between prospective mates for long term mating with commitment.

* Actual online dating sites offering compatibility matching methods, when calculating compatibility between prospective mates, have less or at least the same precision as searching on one's own. [in the range of 3 or 4 persons compatible per 1,000 persons screened]
* That is because they use:
a) simplified versions of personality traits, instead of the 16PF5 or similar with the complete inventory (16 variables)
b) inadequate quantitative methods to calculate compatibility between prospective mates.

To solve that problem I propose:
1) the 16PF5 or similar normative personality test to measure personality of normal persons over 26 years old interested in serious dating.
No actual online dating site offering compatibility matching methods uses the 16PF5 normative test available in different languages or similar test.
2) a new quantitative method to calculate compatibility between prospective mates, based on quantized pattern comparison (part of pattern recognition by correlation)
The value of my algorithm is to achieve far more precision than searching on one's own [in the range of 3 persons compatible per 100,000 persons screened, 100 times better than actual competitors]