Recently I was asked about using the Millon Clinical Multiaxial Inventory-III (MCMI-III) for seious online dating purposes.
Short answer: It CAN NOT outperform the 16PF5 test. 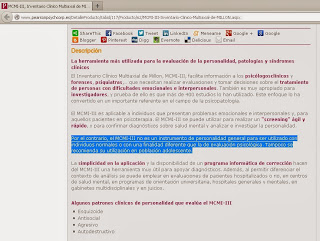 Both the Millon Clinical Multiaxial Inventory-III (MCMI-III) and the Minnesota Multiphasic Personality Inventory are NOT general personality instruments to be used with normal individuals.

Also, some time ago I was asked about the California Psychological Inventory (CPI), a self-report inventory created by Harrison Gough and currently published by Consulting Psychologists Press. The test was first published in 1956, and the most recent revision was published in 1987. It was created in a similar manner to the Minnesota Multiphasic Personality Inventory (MMPI)—with which it shares 194 items. But unlike the MMPI, which focuses on maladjustment or clinical diagnosis, the CPI was created to assess the everyday "folk-concepts" that ordinary people use to describe the behavior of the people around them.


The Online Dating Industry does not need a 10% improvement, a 50% improvement or a 100% improvement. It does need "a 100 times better improvement"
The only way to revolutionize the Online Dating Industry is using the 16PF5 normative personality test, available in different languages to assess personality of members, or a proprietary test with exactly the same traits of the 16PF5 and expressing compatibility with eight decimals (needs a quantized pattern comparison method, part of pattern recognition by cross-correlation, to calculate similarity between prospective mates.)

Without offering the NORMATIVE16PF5 (or similar test measuring exactly the 16 personality factors) for serious dating, it will be impossible to innovate and revolutionize the Online Dating Industry
All other proposals are NOISE and perform as placebo.