PAPER: How do personality traits affect communication among users in online social networks? 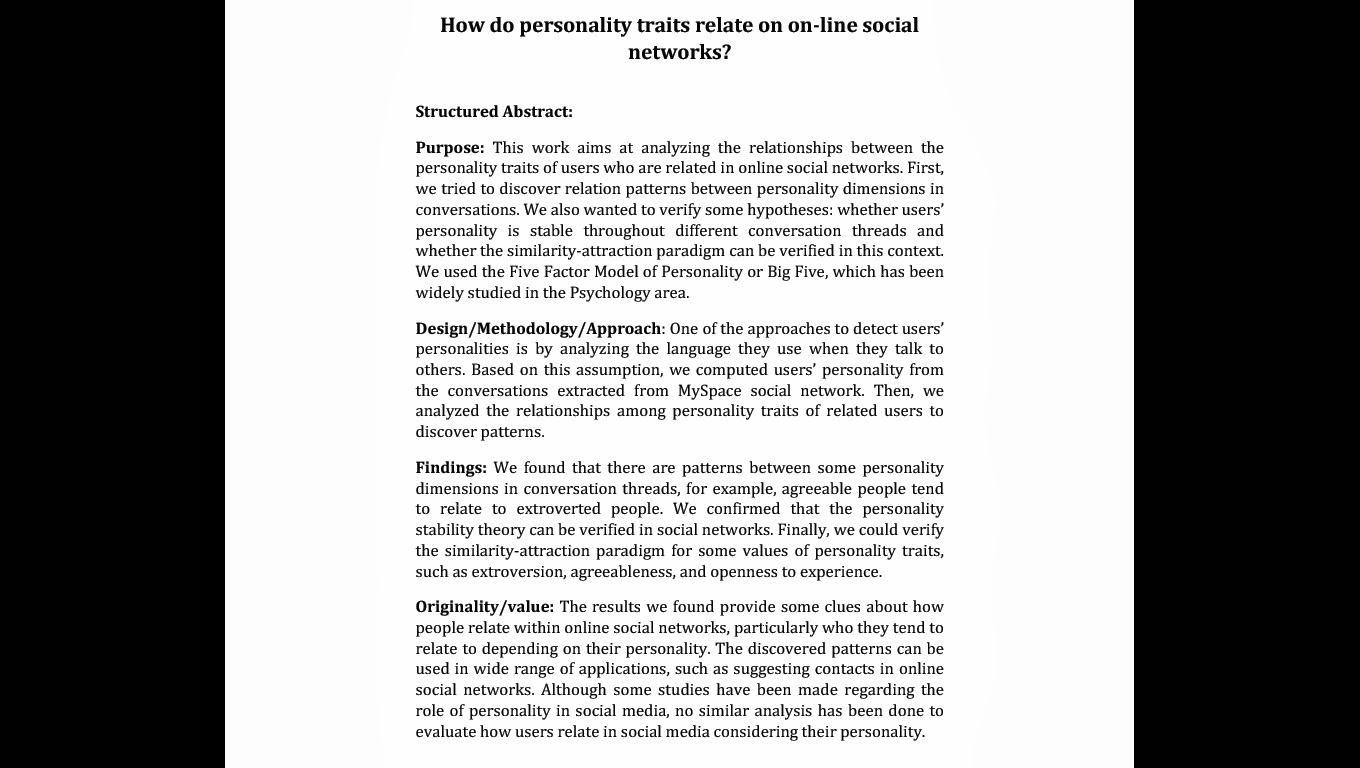 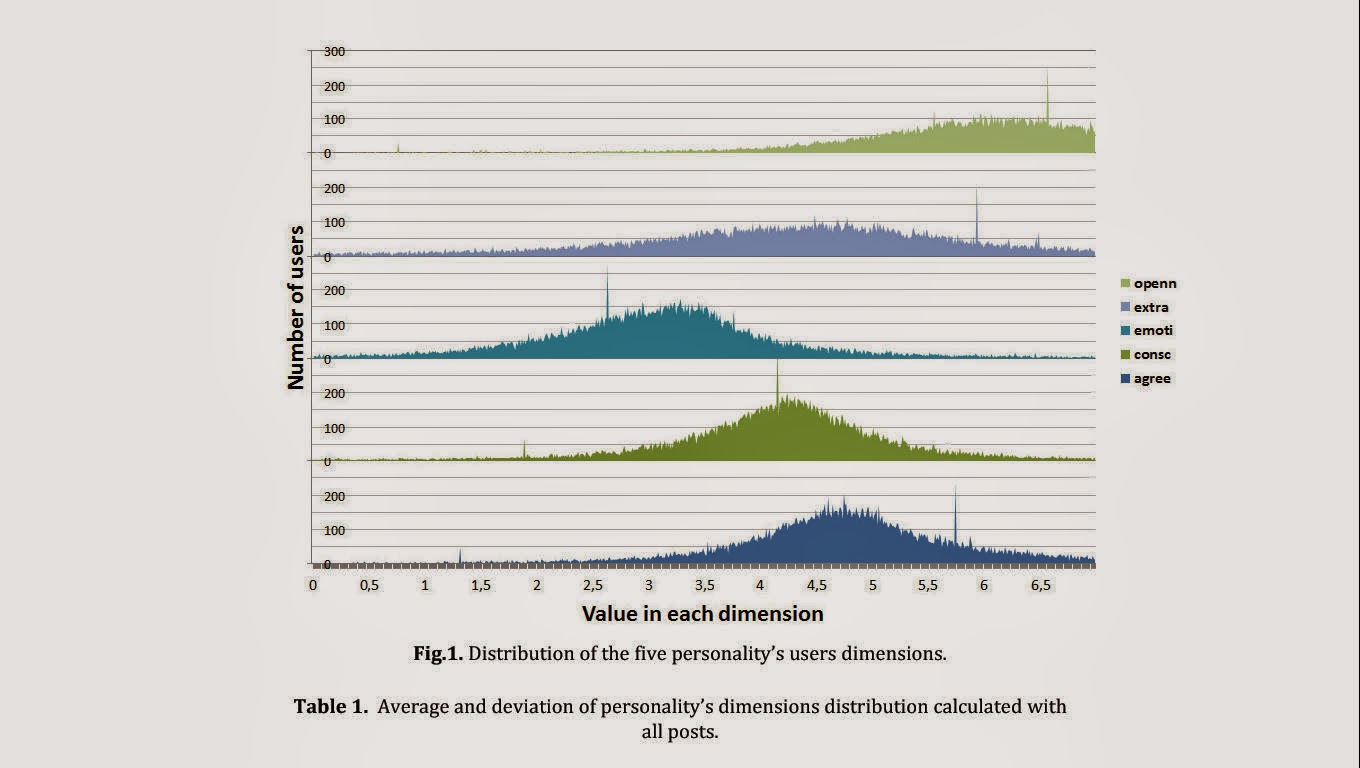 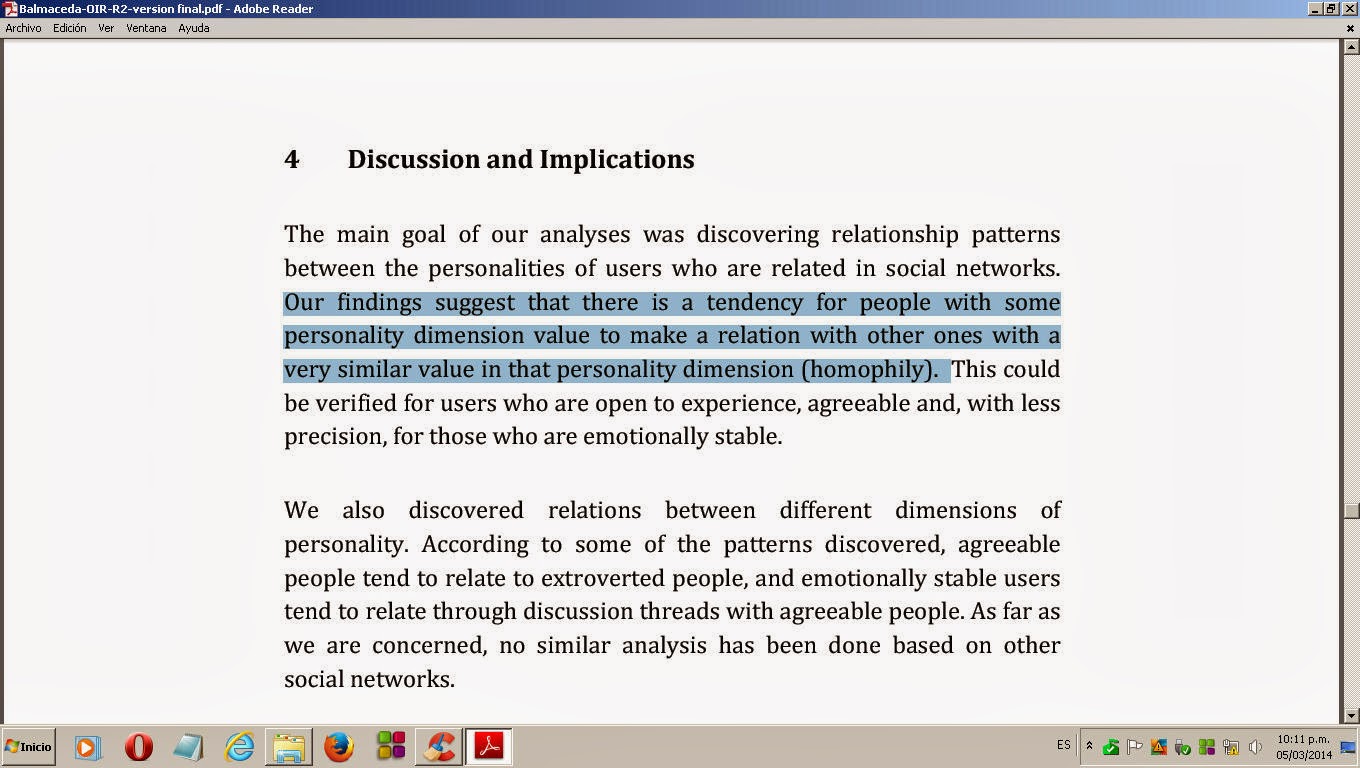 Abstract:
http://www.ingentaconnect.com/content/mcb/264/2014/00000038/00000001/art00008
Purpose – The purpose of this work is to analyse the relationships between the personality traits of linked users in online social networks. First the authors tried to discover relation patterns between personality dimensions in conversations. They also wanted to verify some hypotheses: whether users' personality is stable throughout different conversation threads and whether the similarity-attraction paradigm can be verified in this context. We used the Five Factor model of personality or Big Five, which has been widely studied in psychology.

Design/methodology/approach – One of the approaches to detect users' personalities is by analysing the language they use when they talk to others. Based on this assumption the authors computed users' personality from the conversations extracted from the MySpace social network. Then the authors analysed the relationships among personality traits of users to discover patterns.

Findings – The authors found that there are patterns between some personality dimensions in conversation threads, for example, agreeable people tend to communicate with extroverted people. They confirmed that the personality stability theory can be verified in social networks. Finally the authors could verify the similarity-attraction paradigm for some values of personality traits, such as extroversion, agreeableness, and openness to experience.

"The Twitter Me Is Not The Real Me"
http://onlinedatingsoundbarrier.blogspot.com.ar/2010/05/twitter-me-is-not-real-me.html

Personality Based Recommender Systems are the next generation of recommender systems because they perform far better than Behavioural ones (past actions and pattern of personal preferences)
That is the only way to improve recommender systems, to include the personality traits of their users. They need to calculate personality similarity between users but there are different formulas to calculate similarity. In case you had not noticed, recommender systems are morphing to .......... compatibility matching engines, as the same used in the Online Dating Industry since years, with low success rates until now because they mostly use the Big Five (a.k.a. Five Factor, BIG 5 or OCEAN model) to assess personality and the Pearson correlation coefficient to calculate similarity.
The Big Five normative personality test is obsolete, it has been proven as an incomplete and incorrect model of personality.
The HEXACO (a.k.a. Big Six) is another oversimplification.
Online Dating sites OFFERING COMPATIBILITY MATCHING METHODS BASED ON PERSONALITY SIMILARITY have very big databases, in the range of 20,000,000 (twenty million) profiles, so the Big Five model or the HEXACO model are not enough for predictive purposes. That is why I suggest the 16PF5 test instead.
The same applies for Personality Based Recommender Systems. Please see: "How to calculate personality similarity between users" Short answer: the key is the ENSEMBLE!
(the whole set of different valid possibilities)
http://onlinedatingsoundbarrier.blogspot.com.ar/2013/03/how-to-calculate-personality-similarity.html