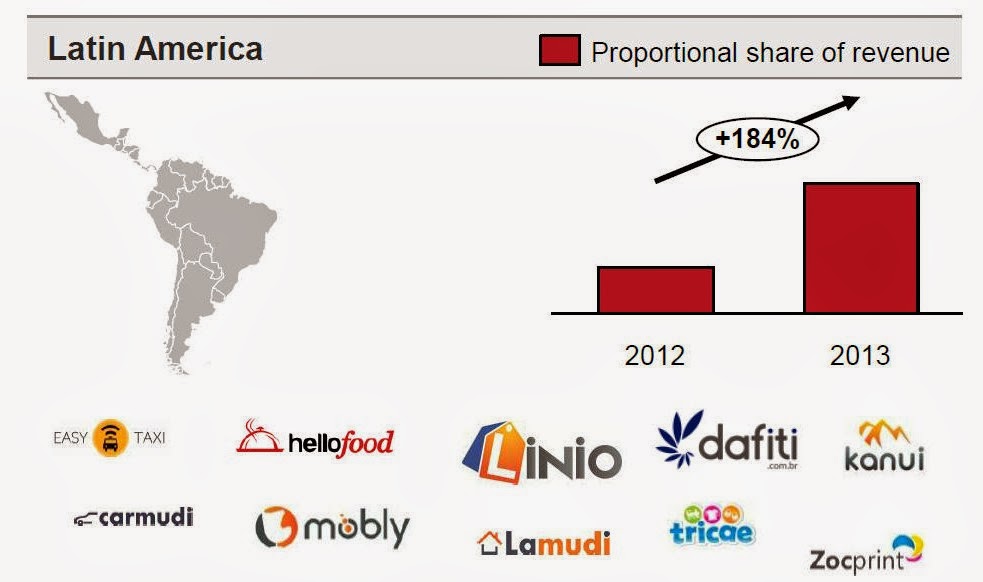 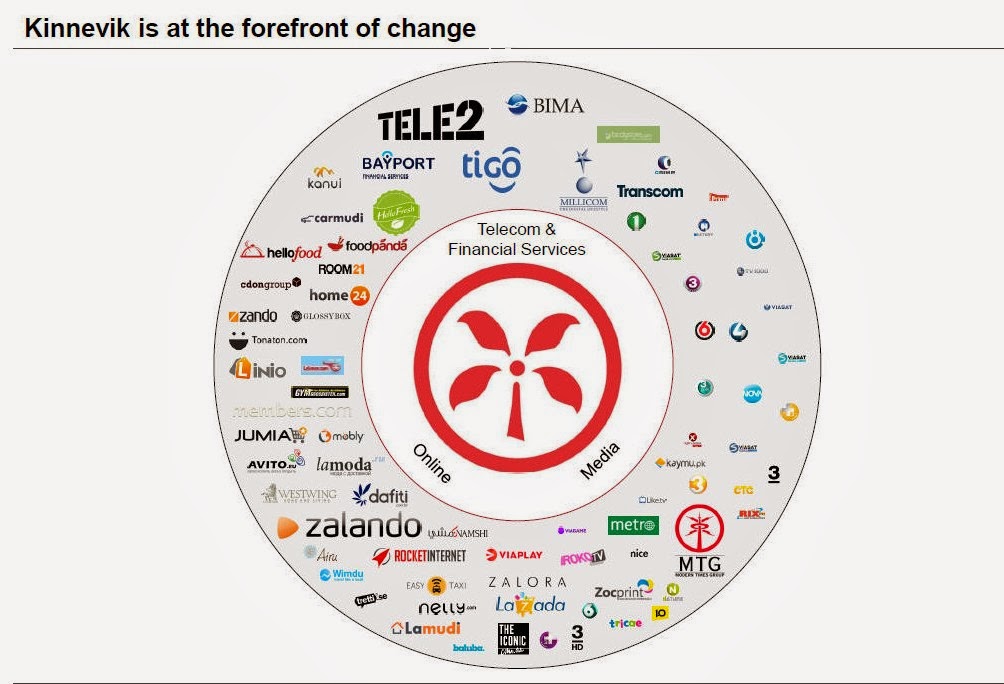 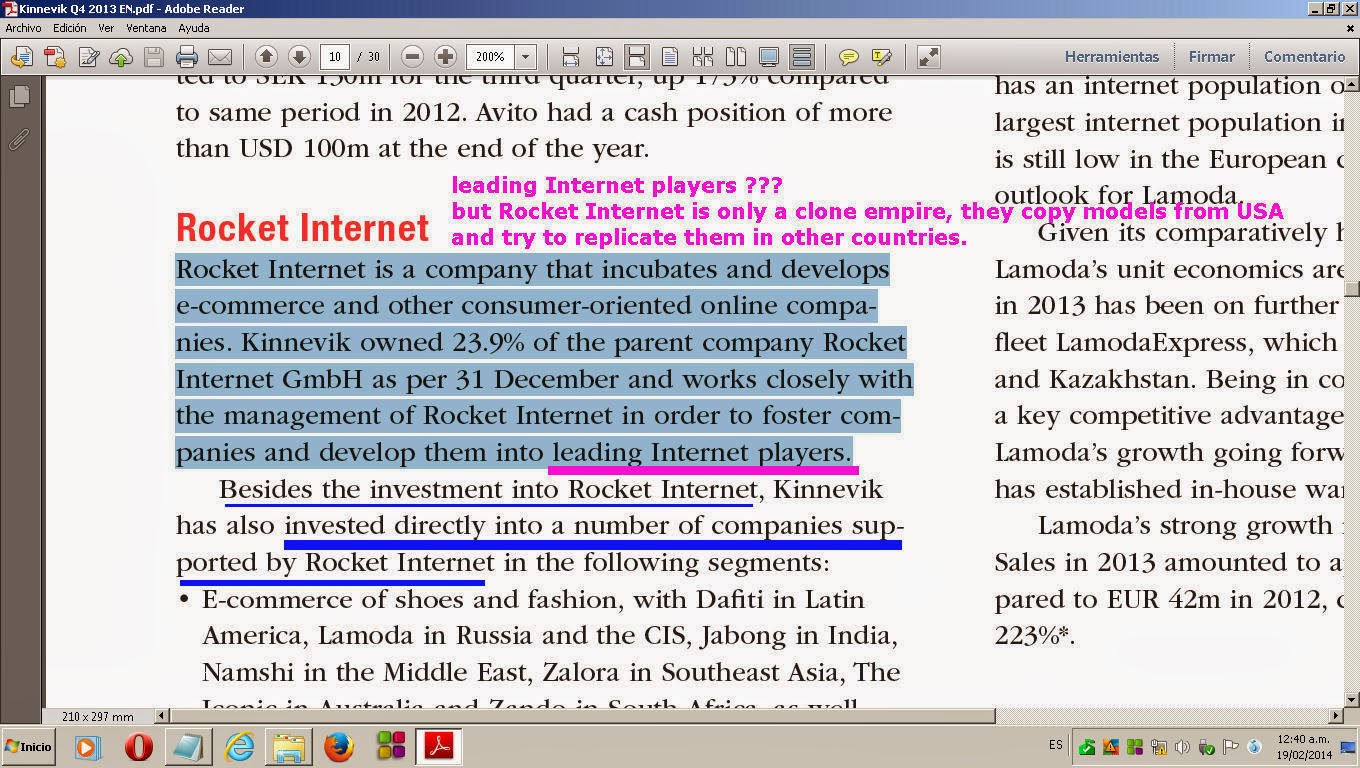 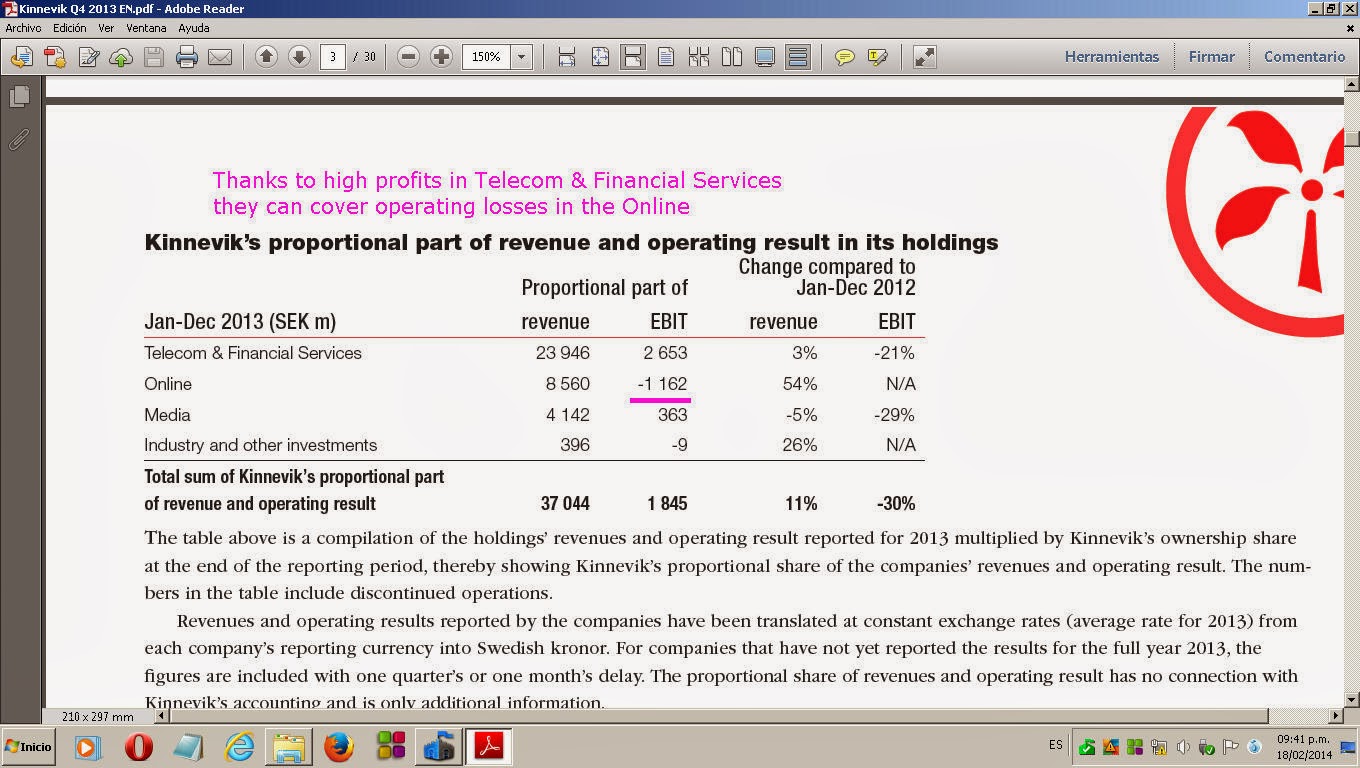 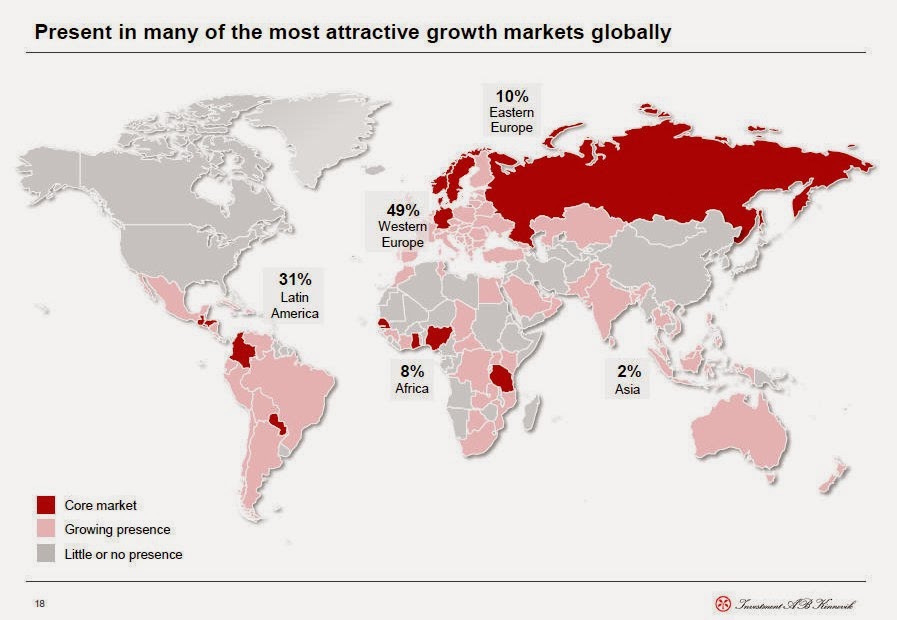 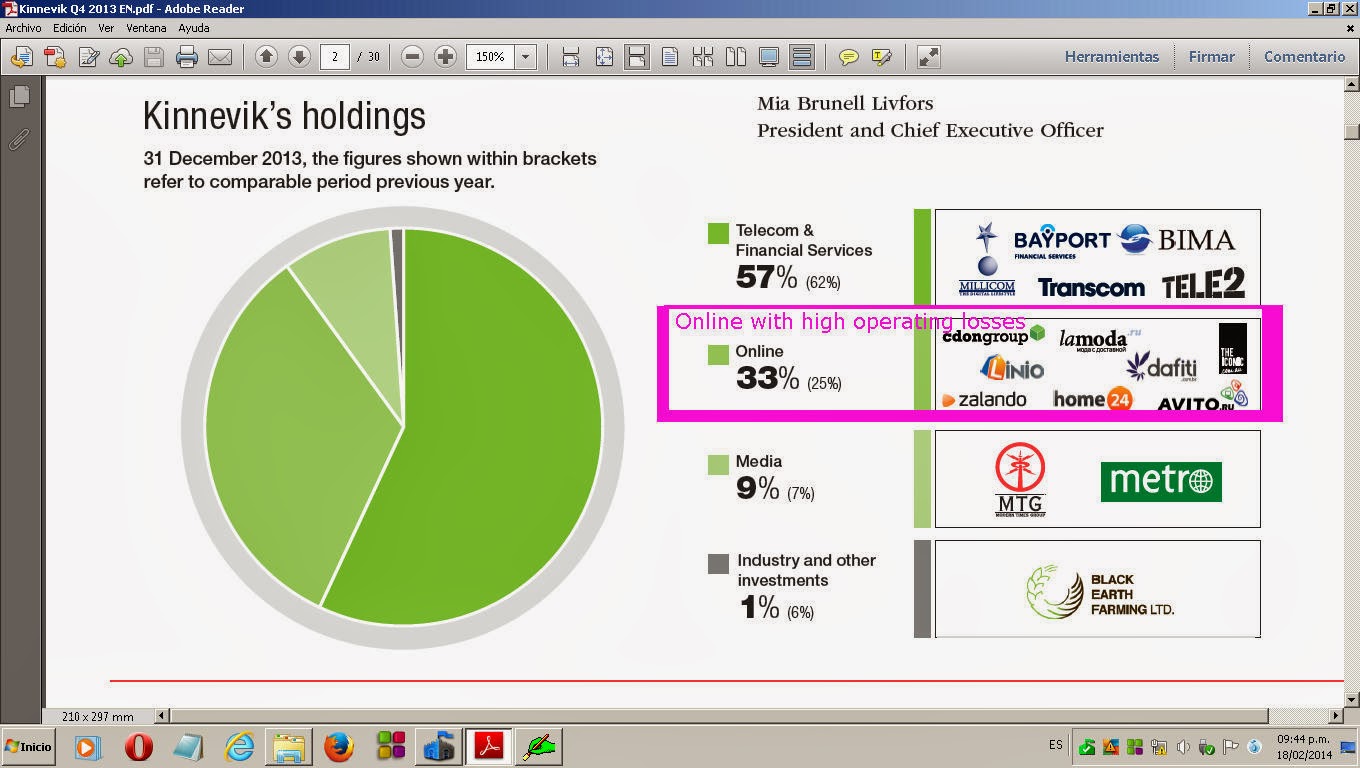 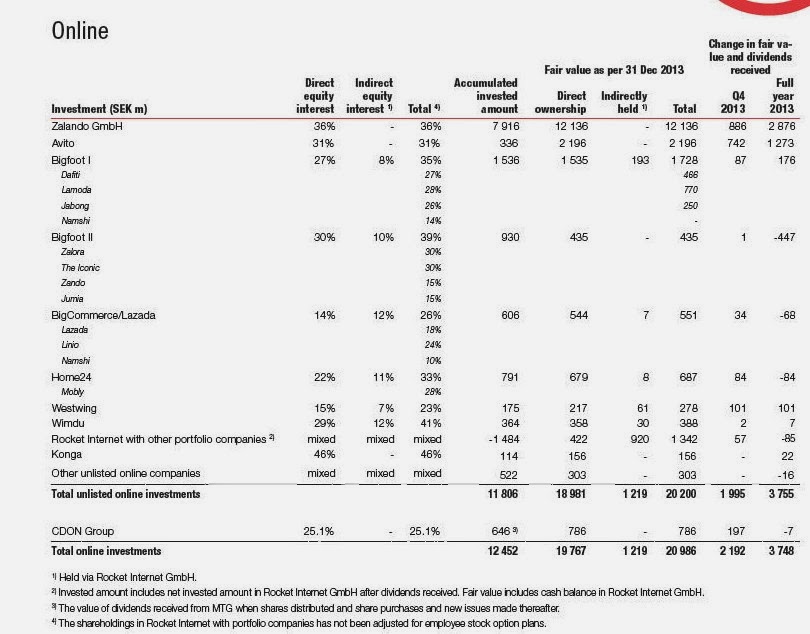 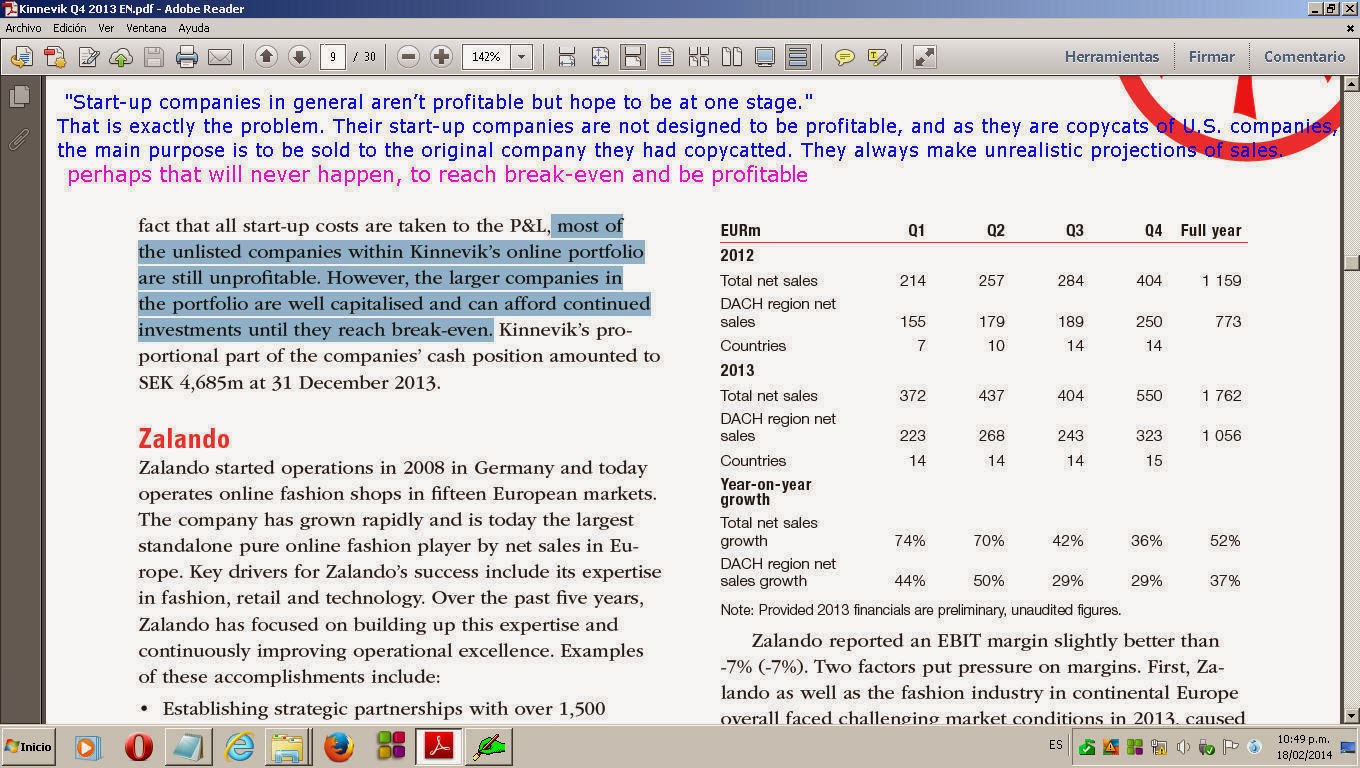 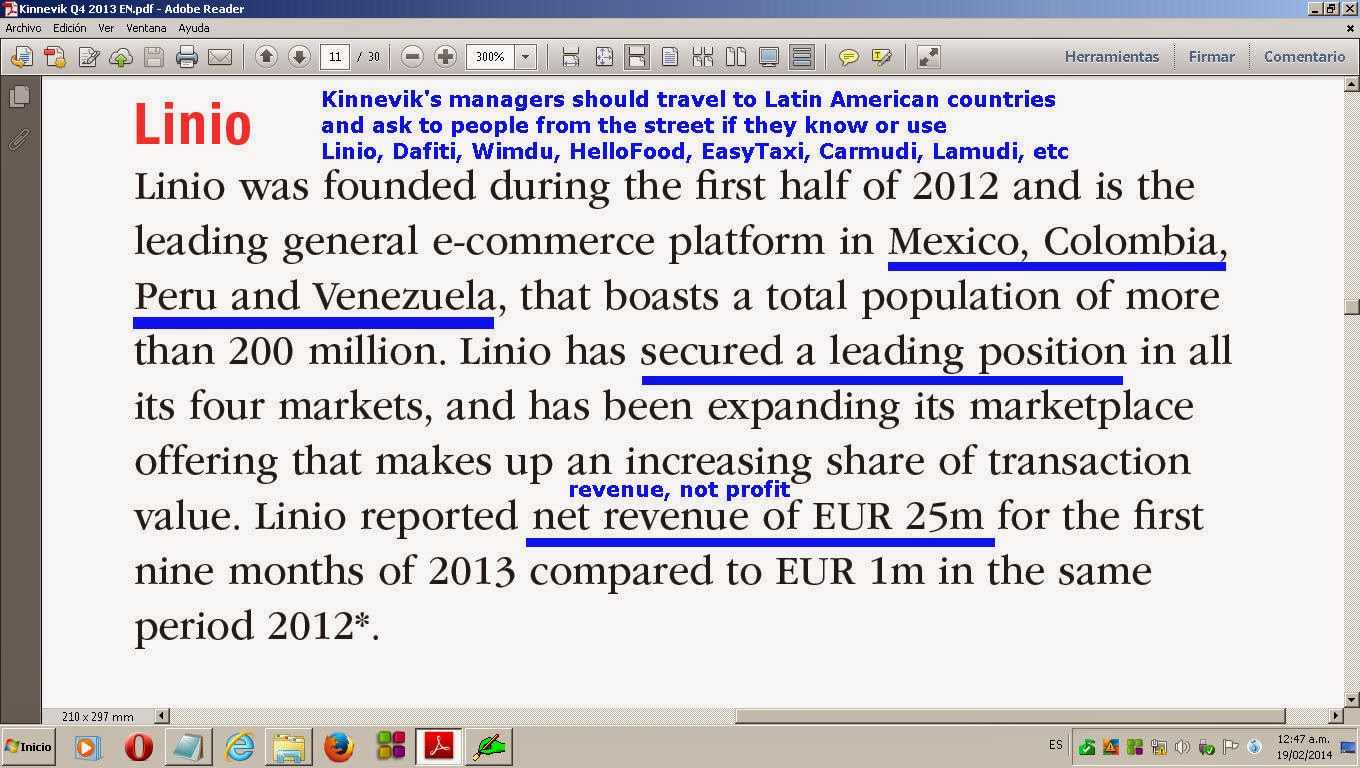 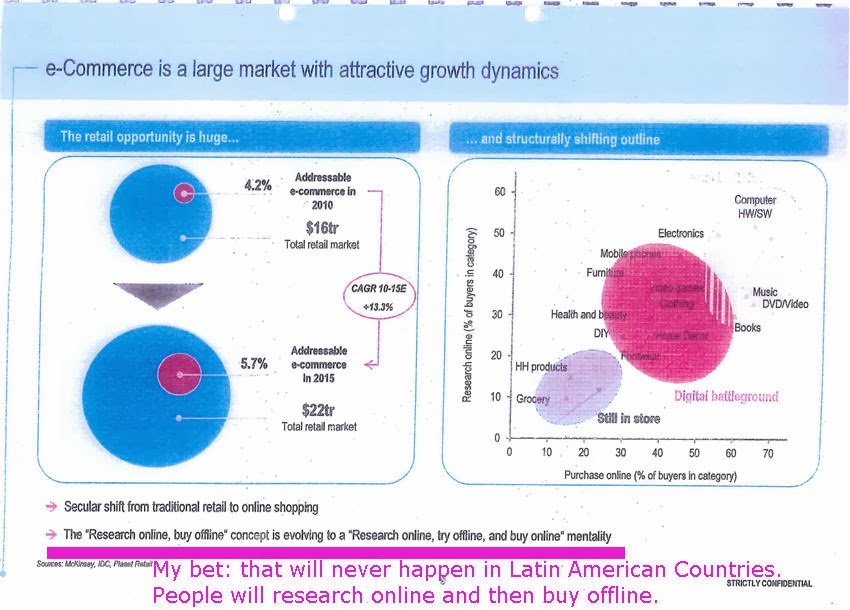 "The Kinnevik online investments are mainly focused around e-commerce and market places. E-commerce is one of the strongest global growth trends in the world economy, and it is based on a shift in consumer behaviour which we believe is not a short term trend but represents a permanent change in consumer behaviour.
Within e-commerce, Kinnevik has focused its investments in the shoes and fashion segment through companies such as Zalando with geographical presence in Europe and companies such as Lamoda, Dafiti, Jabong and Zalora focused on emerging markets."


"most of the unlisted companies within Kinnevik’s online portfolio are still unprofitable. However, the larger companies in the portfolio are well capitalised and can afford continued investments until they reach break-even."


One Journalist said, last November 2013 when I told her about "Glossybox .... some international branches shut down" :
" I don't know if the site stats tell the whole story but I am not surprised to hear that some businesses in the Rocket empire are not flourishing. "
http://onlinedatingsoundbarrier.blogspot.com.ar/2013/11/glossybox-some-international-branches.html
other Journalist asked me about: "Start-up companies in general aren't profitable but hope to be at one stage."
I replied: That is exactly the problem. Their start-up companies are not designed to be profitable, and as they are copycats of U.S. companies, the main purpose is to be sold to the original company they had copycatted.
They always make unrealistic projections of sales: "For the Brazilian Amazon clone Linio the Samwers offer a return of 12 percent in 2017. The Amazon model generates 1.1 percent."
http://onlinedatingsoundbarrier.blogspot.com.ar/2014/02/secret-papers-how-samwer-bros-woo.html
I suspect no one of the cloned companies by Samwer Bros. are really profitable or sustainable for the next 5 years, to until 2019 at least; and as they will not be able to sell to the original company they had copycatted, as they failed to sell Affinitas GmbH. to eHarmony Inc. last March 2012 and as the Management Team can not innovate in nothing because they are not entrepreneurs, they will collapse. All cloned companies seem like bubbles.

" ..... They steal the business ideas of others in other countries and then bring appropriate clones on the market. The companies are then usually sold to the original inventor of the idea again and dissolve into thin air " translated from "Sie klauen die Geschäftsideen anderer in anderen Ländern und bringen dann entsprechende Klone an den Markt. Die Firmen werden dann zumeist an den ursprünglichen Erfinder der Idee wieder verkauft und lösen sich in Luft auf. "
http://onlinedatingsoundbarrier.blogspot.com.ar/2013/10/a-coldsilent-war-and-forbidden-news-in.html