You can also type
https://www.bundesanzeiger.de/ebanzwww/wexsservlet
and then search for Zalando to see by your own! 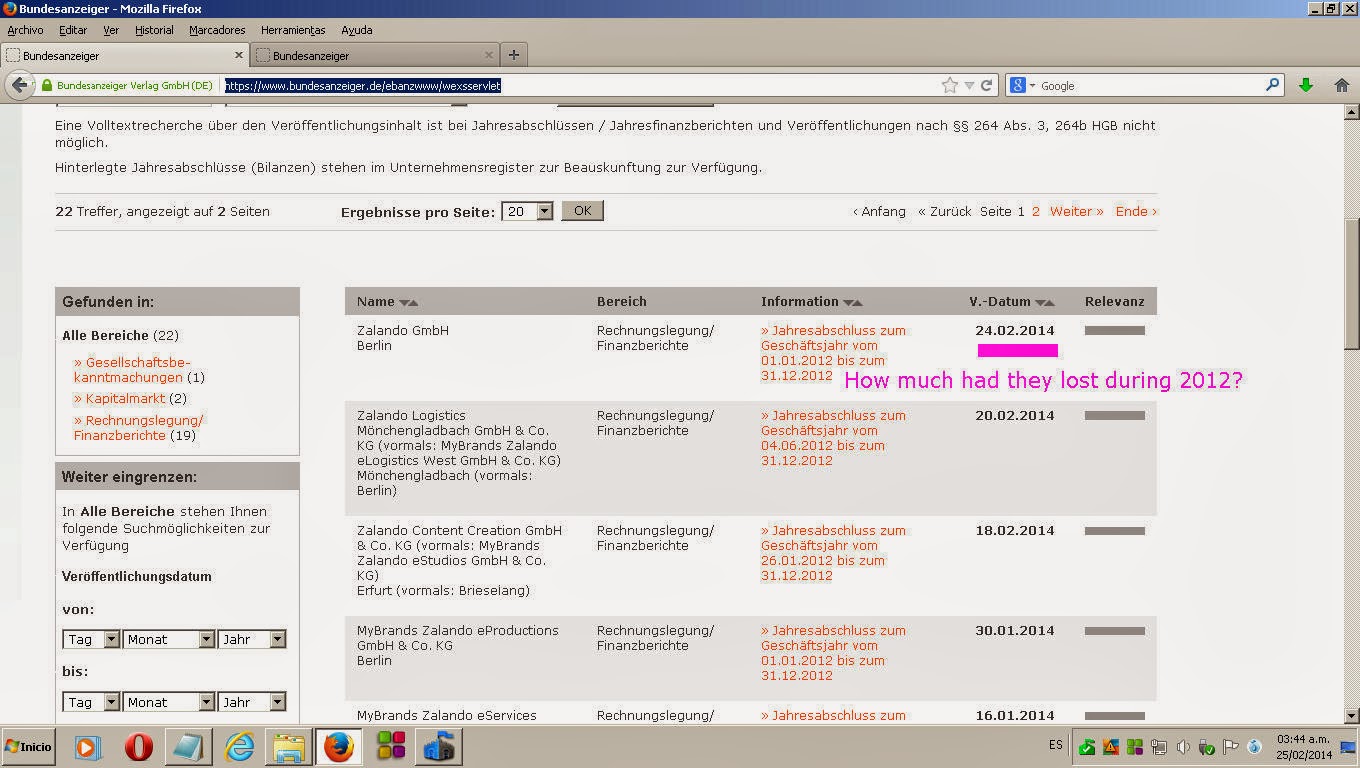 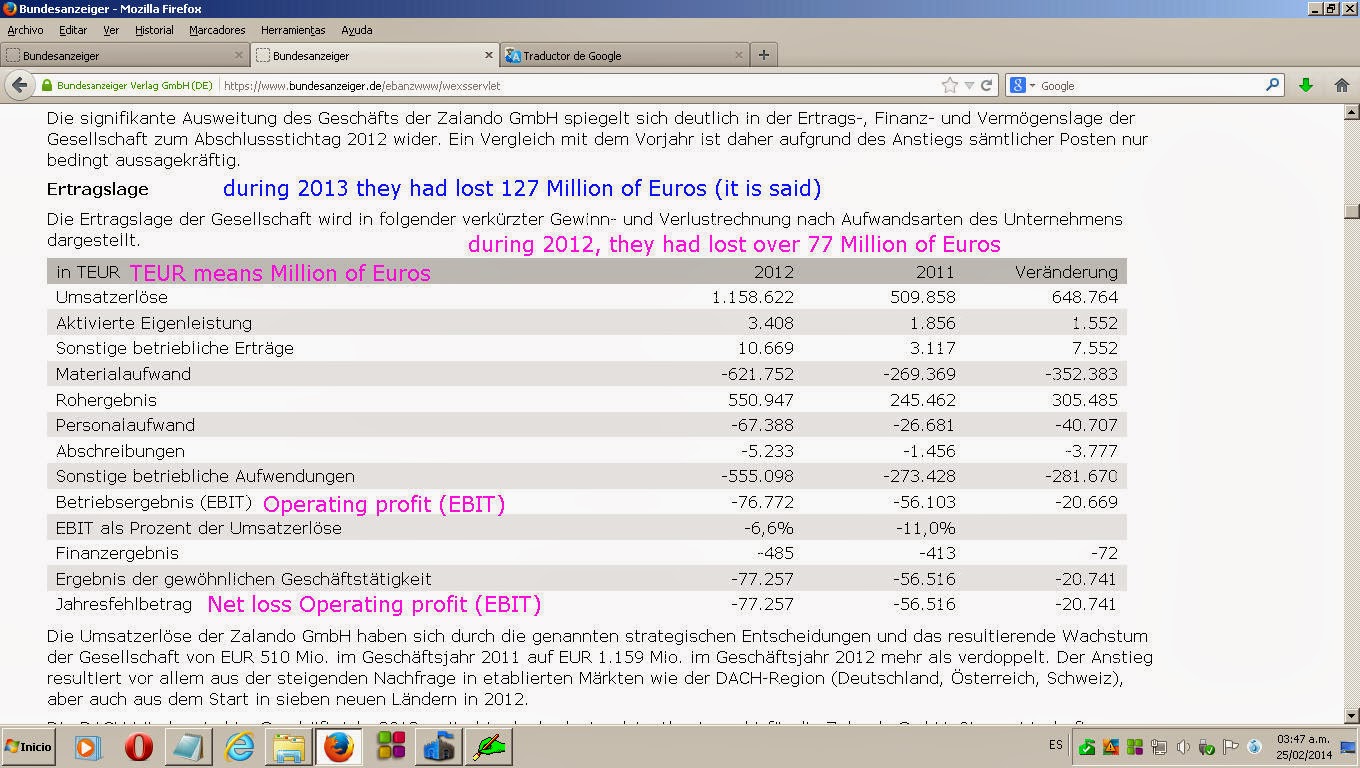 It is said during 2013, Zalando lost 127 Million of Euros http://www.deutsche-startups.de/2014/02/14/zalando-waechst-auf-18-milliarden-euro-umsatz/
Now 2014 they are planning its IPO.
http://onlinedatingsoundbarrier.blogspot.com.ar/2014/02/zalando-ipo-7-fresh-articles-written-14.html
Seven Balance Sheets Rocket Internet clone empire and companies.
http://onlinedatingsoundbarrier.blogspot.com.ar/2014/02/seven-balance-sheets-rocket-internet.html
Please remember:
AB Kinnevik's holdings is main investor and main partner of Rocket Internet GmbH.
They had invested in Rocket Internet GmbH.
and
They had acquired shares from several Rocket Internet GmbH.'s companies
http://onlinedatingsoundbarrier.blogspot.com.ar/2014/02/about-kinneviks-holdings.html
"Rocket Internet is a company that incubates and develops e-commerce and other consumer-oriented online companies. Kinnevik owned 23.9% of the parent company Rocket Internet GmbH as per 31 December 2013 and works closely with the management of Rocket Internet in order to foster companies and develop them into leading Internet players."
"The Kinnevik online investments are mainly focused around e-commerce and market places. E-commerce is one of the strongest global growth trends in the world economy, and it is based on a shift in consumer behaviour which we believe is not a short term trend but represents a permanent change in consumer behaviour.
Within e-commerce, Kinnevik has focused its investments in the shoes and fashion segment through companies such as Zalando with geographical presence in Europe and companies such as Lamoda, Dafiti, Jabong and Zalora focused on emerging markets."

My bet:
Their start-up companies are not designed to be profitable, and as they are copycats of U.S. companies, the main purpose is to be sold to the original company they had copycatted.
They always make unrealistic projections of sales: "For the Brazilian Amazon clone Linio the Samwers offer a return of 12 percent in 2017. The Amazon model generates 1.1 percent."
http://onlinedatingsoundbarrier.blogspot.com.ar/2014/02/secret-papers-how-samwer-bros-woo.html
I suspect no one of the cloned companies by Samwer Bros. are really profitable or sustainable for the next 5 years, to until 2019 at least; and as they will not be able to sell to the original company they had copycatted, as they failed to sell Affinitas GmbH. to eHarmony Inc. last March 2012 and as the Management Team can not innovate in nothing because they are not entrepreneurs, they will collapse. All cloned companies seem like bubbles.


During July 2013 I had begun to discover impressive patterns of anomalies consistent with fraudulent practices, when Affinitas GmbH. launched EliteSingles - the online dating site, copycat of eHarmony Inc. -  in the United Kingdom. I reported several times to Affinitas GmbH.'s Management Team and employees and guess I had received 2 legal letters from local lawyers accusing me of slander and defamation. Affinitas GmbH. and their local lawyers in Argentina, that may also be lawyers from Rocket Internet GmbH. want/wanted to force me to retract and sign a non disclosure/comment document on that issue because if Affinitas GmbH. is revealed in public as major fraud, ... Rocket Internet clone empire could be revealed by Journalists as big Ponzi schema of USD 3 Billion, involving over 250 Internet companies cloned by the Samwers ? Like Parmalat, Enron Corporation, Bernie Madoff, and other frauds!
http://onlinedatingsoundbarrier.blogspot.com.ar/2014/02/i-recommend-complete-independent-audit.html
Last January 21th 2014, Summer time in Argentina, I had to call local police (Argentinean Federal Police, Cybercrimes division) to denounce / suggest them to investigate Affinitas GmbH. and their local lawyers in a possible illegal association / illicit association
and
suggest them to investigate Rocket Internet Argentina and local (phantoms ?)  internet companies like HelloFood, Wimdu, EasyTaxi, Dafiti in a possible illegal association / illicit association for a Ponzi schema.