PAPER: The effects of culture and gender on perceived self-other similarity in personality 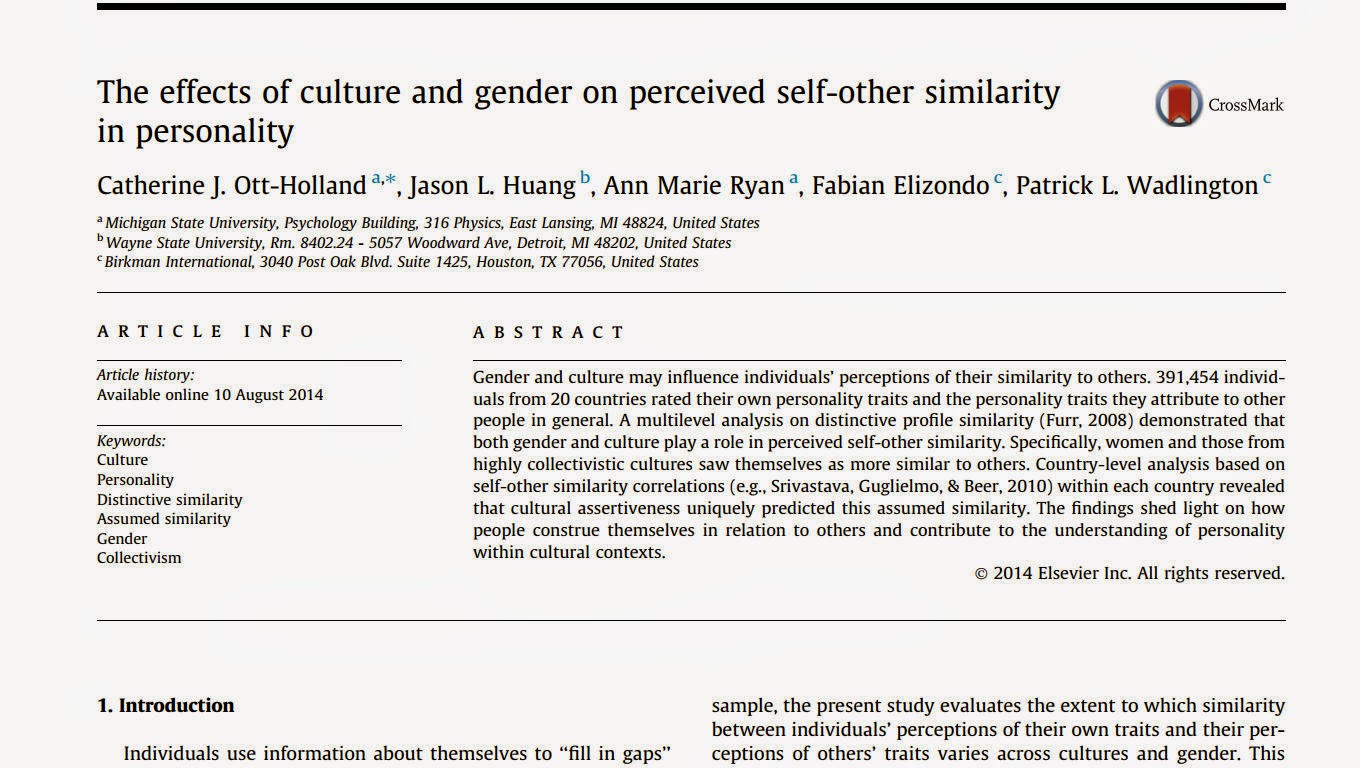 http://www.sciencedirect.com/science/article/pii/S0092656614000774
Gender and culture may influence individuals’ perceptions of their similarity to others. 391,454 individuals from 20 countries rated their own personality traits and the personality traits they attribute to other people in general. A multilevel analysis on distinctive profile similarity demonstrated that both gender and culture play a role in perceived self-other similarity. Specifically, women and those from highly collectivistic cultures saw themselves as more similar to others. Country-level analysis based on self-other similarity correlations within each country revealed that cultural assertiveness uniquely predicted this assumed similarity. The findings shed light on how people construe themselves in relation to others and contribute to the understanding of personality within cultural contexts.

Understanding how culture influences the way individuals see themselves in relation to others has the potential to expand theoretical work on the assumed similarity of personality.

Please remember: Similarity is a word that has different meanings for different persons or companies, it exactly depends on how mathematically is defined. I calculate similarity in personality patterns with (a proprietary) pattern recognition by correlation method. It takes into account the score and the trend to score of any pattern. Also it takes into account women under hormonal treatment because several studies showed contraceptive pills users make different mate choices, on average, compared to non-users. "Only short-term but not long-term partner preferences tend to vary with the menstrual cycle".

The Online Dating Industry needs Innovations, but the innovations the Online Dating Industry needs will come from only one source: the latest discoveries in theories of romantic relationships development with commitment.
Personality traits are highly stable in persons over 25 to 45 years old (the group of persons who could be most interested in serious online dating)
The key to long-lasting romance is STRICT PERSONALITY SIMILARITY.
http://onlinedatingsoundbarrier.blogspot.com.ar/2014/07/paper-meta-analysis-of-dependability.html


What comes after the Social Networking wave?
The Next Big Investment Opportunity on the Internet will be .... Personalization!
Personality Based Recommender Systems and Strict Personality Based Compatibility Matching Engines for serious Online Dating with the normative 16PF5 personality test.
The 8 tips to innovate in the Online Dating Industry 2014!