the Obsolescence of Dating Sites / part 2


Last year I had written about the Obsolescence of Dating Sites offering Compatibility Matching Methods.
No one of them can prove its matching algorithm can match prospective partners who will have more stable and satisfying relationships than couples matched by chance, astrological destiny, personal preferences, searching on one’s own, or other technique as the control group in a peer_reviewed Scientific Paper.
All of them have a low effectiveness/efficiency level of their matching algorithms (less than 10%). The majority, over 90% of its members are not going to achieve a long term relationship with commitment (or marriage)

All of them are like placebo, because
* Actual online dating sites offering compatibility matching methods, when calculating compatibility between prospective mates, have less or at least the same precision as searching on one’s own. [in the range of 3 or 4 persons compatible per 1,000 persons screened]
* That is because they use:
a) simplified versions of personality traits, instead of the 16PF5 or similar with the complete inventory (16 variables)
b) inadequate quantitative methods to calculate compatibility between prospective mates
The writer and journalist Lori Gottlieb (March 2006) noted about the growing number of Internet dating sites that are using the science of attraction to match singles: “their efforts mark the early days of a social experiment of unprecedented proportions, involving millions of couples and possibly extending over the course of generations”
WorldWide, there are over 5,000 -five thousand- online dating sites
but no one is using the 16PF5 to assess personality of its members!
but no one calculates similarity with a quantized pattern comparison method!
but no one can show Compatibility Distribution Curves to each and every of its members!
but no one is scientifically proven!
Dr. Neil Clark Warren, CEO Of eHarmony, plans to speak at iDate2013 Las Vegas Superconference (I hope it will not be a virtual meeting or showing a pre-recorded video). 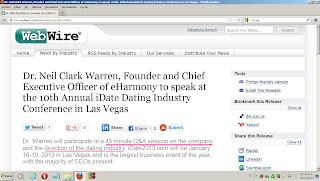 “Dr. Warren will participate in a 45 minute Q&A session on the company and the direction of the dating industry. iDate2013.com will be January 16-19, 2013 in Las Vegas and is the largest business event of the year, with the majority of CEOs present”
Or perhaps he plans to attend there in order to close the deal with the CEO of Match (IAC) and sell eHarmony for USD1Billion.


I had challenged eHarmony’s Team, several times, to replace eHarmony, a 12+ years old amp; obsolete site, performing as placebo, with a a new site with a new matching algorithm using the 16PF5 test or similar including the 3 latest discoveries in theories of romantic relationships development with commitment.
I) Several studies showing contraceptive pills users make different mate choices, on average, compared to non-users. “Only short-term but not long-term partner preferences tend to vary with the menstrual cycle”
II) People often report partner preferences that are not compatible with their choices in real life. (Behavioural recommender systems or other system that learns your preferences are useless)
III) What is important in attracting people to one another may not be important in making couples happy. Compatibility is all about a high level on personality similarity between prospective mates for long term mating with commitment.
Also there is a similarity trilogy between genetic, mate choice and personality based recommender systems.
But …. eHarmony’s Team don’t want to innovate in nothing and they will collapse next March 2013.
The only way to revolutionize the Online Dating Industry is using the 16PF5 normative personality test, available in different languages to assess personality of members, or a proprietary test with exactly the same traits of the 16PF5 and expressing compatibility with eight decimals (needs a quantized pattern comparison method, part of pattern recognition by cross-correlation, to calculate similarity between prospective mates.)
High precision in matching algorithms is precisely the key to open the door and leave the infancy of compatibility testing.
It is all about achieving the eighth decimal!
With 8 decimals, you have more precision than any person could achieve by searching on one’s own, but the only way to achieve the eighth decimal is using analysis and correlation with quantized patterns.
Without offering the NORMATIVE16PF5 (or similar test measuring exactly the 16 personality factors) for serious dating, it will be impossible to innovate and revolutionize the Online Dating Industry
All other proposals are NOISE and perform as placebo.
Publicado por FERNANDO_ARDENGHI en 10:27 AM