The PlentyOfFish CEO is conducting a big human experiment as per his post in his blog.
He had written
"Similarity and other Psychological constructs  are not used in our matching system.   This is something a Psychologicist would do if they were responsible for making a matching system."
but at http://www.pof.com/poftest.aspx can be read
Plentyoffish Chemistry Predictor
The Plentyoffish Relationship Chemistry Predictor (POFCP) measures five broad dimensions of personality that are each essential for building a romantic relationship.
We measure...
Factor 1: Self-Confidence This dimension was created to measure the extent to which an individual feel comfortable with him or herself. The items in this dimension reflect elements of self-confidence in both private and public contexts.
Factor 2: Family Orientation This dimension was developed to assess the degree to which a person possess a family orientation.
Factor 3: Self-Control This dimension measures the extent to which a person exerts control over sundry aspects of their lives and the lives of others.
Factor 4: Social Dependency/Openness This dimension measures the extent to which a person is open to and dependent upon other people.
Factor 5: Easygoingness This dimension taps into characteristics associated with being relaxed and psychologically flexible. We then generate matches for you from a statistical model based on thousands of successful couples who have taken our chemistry test. Our statistical model picks matches that we're especially confident in. We believe the resulting set of matches are users that you will most likely date and maybe marry! 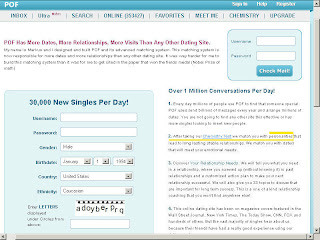 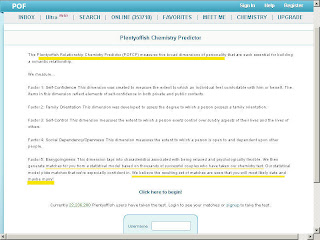 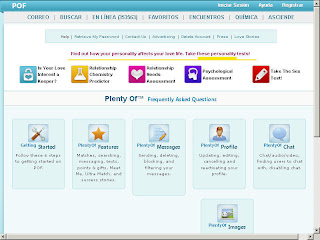 and at http://www.pof.com/faq.aspx can be read
Find out how your personality affects your love life. Take these personality tests!

then he had written
"... I created a behavioral matchmaking system that helped match people up.  ....  but it is a poor system  for predicting relationships."
but at http://www.pof.com/viewultramatches.aspx can be read
Ultra Match is our newest and most advanced matchmatching system!
POF invented the first Behavioral Matching System, and it's still the best in the online dating industry. 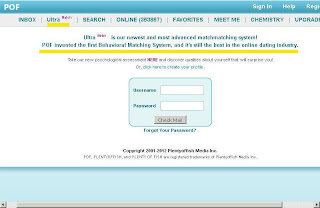 I had contacted him by email and said:
"Marital stability / couple stability are not the same as marital satisfaction.
Commingling analysis is a statistical method for distinguishing between one (usually normal) distribution and a mixture of two or more distributions. I seriously doubt you can apply commingling analysis techniques to REAL data from REAL couples and discover if there is a hidden variable (a variable can be masked by other variable). 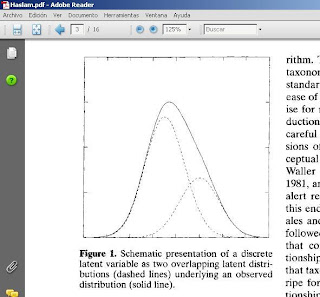 Why do not you publish your findings -without revealing proprietary information- in a peer reviewed Scientific Paper for public and Academic scrutiny?
Does eVow, the paid site from PlentyOfFish uses the same predictive model?
It seems you are only a charlatan with money. No more than that.

I seriously doubt your predictive model is working as effective as you claim, because:
In compatibility matching methods there are 2 steps:
1) to objectively measure personality traits or other human variables without distortion.
2) to calculate compatibility between prospective mates.

The Online Dating Industry needs innovations but they will come from only one source: the latest discoveries in theories of romantic relationships development with commitment.
I) Several studies showing contraceptive pills users make different mate choices, on average, compared to non-users.
II) People often report partner preferences that are not compatible with their choices in real life.(FORGET Behavioural recommender systems or other system that learns your preferences)
III) Compatibility is all about a high level on personality* similarity* between prospective mates for long term mating with commitment.
*personality measured with a normative test.
*similarity: there are different ways to calculate similarity, it depends on how mathematically is defined."